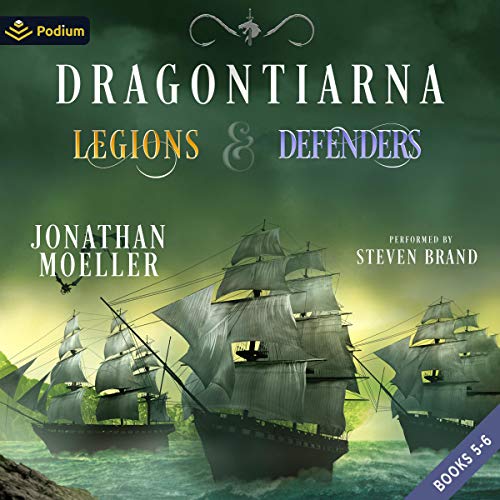 Contains books five and six of the Dragontiarna series.

Ridmark Arban is the Shield Knight, and he has long been the defender of Andomhaim from dark magic. But now the realm is under attack from both the sinister Dragon Cult and the brutal legions of the Heptarchy. The orcish warlord Agravhask, greatest of the Heralds of Ruin, leads the Heptarchy's invasion. Unless Ridmark gathers all his allies, Andomhaim will fall to Agravhask's iron fist.

The realm of Andomhaim reels beneath the invasion of Warlord Agravhask, and Ridmark stands in his path. Ridmark knows that Agravhask is only the servant of the mighty Warden of Urd Morlemoch, and the realm must be ready to face its true foe. But the Warden knows that Ridmark can stop him, and has dispatched the Heralds of Ruin to slay the Shield Knight. Third of Nightmane Forest has seen the trap, and rushes to save her friend. If she fails, the Warden and his dark Heralds will triumph, and darkness will swallow the world....

Good grief! Nile lives! I hate that idiot!!!!!! Why? What is it with EVERY writer you have to have that one IDIOT character that makes you grinch? In this case that damned Nile!

Why? You and Michael Manning are among my favorite authors. I love your work, but dam! Nile! A country idiot! Geese! That character is the worst! And now that idiot will end up with Mariah, one of my favorite characters, and I have to hate her too! Dammit!

Please please please kill him off!!!! I had to skip half the book because I just couldn’t stand it! Dam!