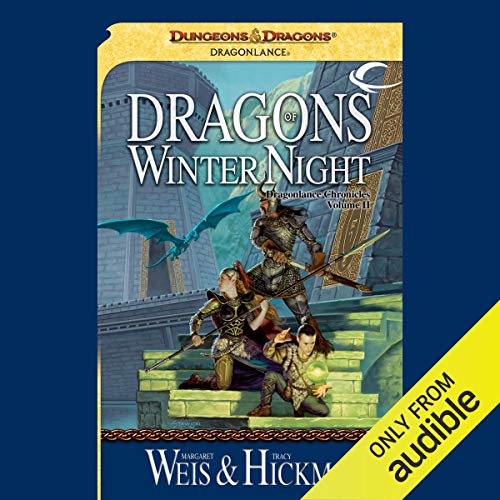 Now the people know that the dragon minions of Takhisis, Queen of Dragons, have returned. The people of all nations prepare to fight to save their homes, their lives, and their freedom. But the races have long been divided by hatred and prejudice. Elven warriors and human knights fight among themselves. It seems the battle has been lost before it begins.

The companions are separated, torn apart by war. A full season will pass before they meet again - if they meet again. As the darkness deepens, a disgraced knight, a pampered elf maiden, and a rattle-brained kender stand alone in the pale winter sunlight.

Not much in the way of heroes.

I first read this book 28 years ago and have reread it from time to time since the audible brings an extra special element that just enriched my enjoyment of one of my favourite fantasy trilogies ever. I whole heartedly endorse this audible book and many thanks to all who brought it to life in audible format

Where does Dragons of Winter Night rank among all the audiobooks you’ve listened to so far?

Average for a recreational read.

Misplaced dramatics and emphasis. Mispronunciations. Pauses where they didn't belong and not where they did belong. Character voices mixed up.

It was a good story or I wouldn't have put up with the annoying narrator.

Really a shame that Audible picked a narrator that reads in such a deliberate monotone that it is almost impossible to tell if it is computer narration or a person.

Better than book one because the authors learned writing on the fly as they wrote this series and were better at righting but book two.

I really want to like this book. I was actually looking forward to it.

But alas, to say no ill of the man himself, Paul Boehmer is just not the right fit for this book.

the narrator needs to learn when to pause for emphasis. that was ridiculous. great book.

The book was great. The BOOK. It was great when I first read it back in the 80s. This audio performance, not so much.

The book, itself, is fantastic. You get a variety of characters and personalities and the scope is epic.

The narrator's attempt to add more drama is a failure. The pauses and stops make the story choppy. If it were a boat ride, I'd be sea-sick. He mispronounces half the names in the books.

The BOOK is fantastic. The audio performance, not so much

A story I read when I was a teenager just as good as I remember. An okay performance and a good Series of books.Worth a listen when all the Great stories run out or if your just stuck as to what you'll read next.

Not Pleased with new reader.

First of all I absolutely love this series. The Chronicles Series from the Dragonlance world contains so many fun charecter. This book definately takes you from the first book running through the progression of the War.

I started listening to this series with Ax Norman, and then audible switched to the reading by Paul Boehmer. Mr. Boehmer reads alot like a text to speech program meets William Shatner. He puts voices to some charecters but only a few and not consistently.

Get it for the story, not the performance.

As a way to re-live the books, this is passable. Please don't make this your first encounter with the series. The reader is terrible. His pronunciations are incorrect and haphazard at times. His delivery is wooden and ill-timed. Yet, it's still not enough to destroy this work of art.

Fun, But the Flaws Still Show

1. Too much happens off-page. Major plot-related events are talked about but go unseen. I understand the authors have since written more about these unseen events more recently, but it's still distracting.

2. The prose is, well, stilted, and it's hard to get past sometimes.

The "dream sequence", while not entirely crucial at times, was entertaining. Having half the characters waste time by making themselves traveling performers... not so much. The book's highlight is the climax, where there are real repercussions to characters' actions, and the consequences are dire.

What aspect of Paul Boehmer’s performance would you have changed?

Boehmer has a tendency to add drama where subtlety would work better. He throws in long pauses, and it probably added a couple of hours to the audiobook.

Do you think Dragons of Winter Night needs a follow-up book? Why or why not?

I mean, it's Book II of a trilogy, and Book III is already out, so yes. The story isn't done, and I'll stick to the end of it. I've put too much time in now, and there are still some fun moments.

Dragons of Winter Night is the Empire Strikes Back of the Dragonlance Chronicles. It's a smidgen better than its predecessor, but it doesn't even try to stand alone. Even though there are plenty of issues with the prose, and there are some aspects of the writing that feel dated, it's got a sense of adventure that still manages to be contagious.

Amazing! Just what I hoped for!

this book was amazing! I was definitely not disappointed. The narration was amazing and the story was as well!

Such a shame this excellent story is spoiled by the rubbish narrator. The narrator expends so much effort pronouncing the words ever so clearly that he totally ignores intonation, punctuation and pacing. It is like listening to an android droning away. I actively avoid any audio books narrated by this guy. I can only hope they re-record these Dragons books with someone good doing the narration..

Still a fantastic story, narrator is a bit off

Would you listen to Dragons of Winter Night again? Why?

Yes I would, repeatedly. I LOVE the Dragonlance Chronicles, it was my first proper reading experience with a true d&d book, and it will remain with me forever as the best books I have read in this genre.

What was one of the most memorable moments of Dragons of Winter Night?

The entry into the nightmare forest of Lorac... wow that was powerful writing throughout that entire episode of the book. Unforgettable atmosphere and character interraction, I felt I was actually "in there" with them.

Did Paul Boehmer do a good job differentiating each of the characters? How?

Ah... yes he did, attempting a fair change of accent for each of the major characters, and even "warming" to a few of them. Paul is Shakespearean trained and it shows, but I find the diction and pace a little too "perfect" outside of the individual character portrayals. As the narrator he could have been a little warmer with a less formal approach to the reading.

I was thoroughly gripped by the Lorac episode, feeling the pains and elations of each character as the story progressed. The style of writing had the desired effect at each stage of the episode, both crying with despair at the tragedy of the characters, and laughing with relief when the nightmare ended. This, to me, was the most emotional and most powerfully written part of the book.

I can't express how much I really like these Chronicles, they hold a special place in my heart and I will always go back to them when I need to lose myself in a world of both endless despair and eternal hope. The depth of this book is vast and I would place it on a par with Middle Earth in it's complexity and history.

Paul Boehmer is an excellent narrator and brings this audiobook to life with this many voices for the characters. This second book in the series sees our merry band of heroes broken up during their adventures and having to follow different paths. The search is on for Dragon orbs that can help in the coming war with the dark queen. Their is a twist in the tale for Tanis and Sturm has to faceoff against the Knights of solamnia. Another book packed with adventure as we continue to follow the exploits of our heroes.