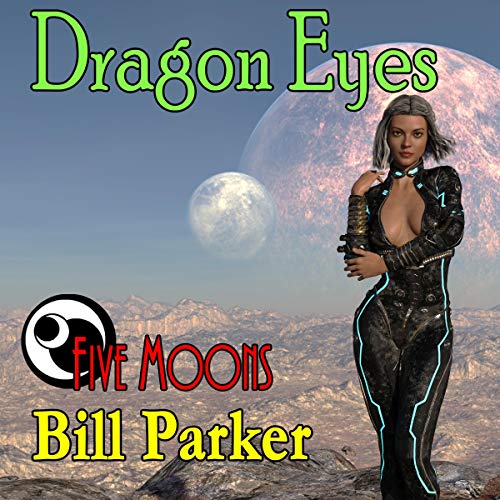 The highly acclaimed saga of the Five Moons continues as Dragon Eyes carries this action-packed adventure into the future. Dragon Eyes is a mystical walk on the wild side of science fiction. The real heart of this story actually began long ago....

A thousand years ago, I was a very gifted seer. I was Evil's worst nightmare. But Evil knew that I only see glimpses of the future. And so he set a plan in motion to kill me. His minions did not know Evil's whole plan. They only knew their own parts in it. He used that fact to trap me. But in the end, I saw my own demise. There was no way out. I was doomed. So, I recorded my own moon and hid it away, where Evil would never find it.

My love, Arowin, felt in his heart the second of my end. To the end of his days did he search for me. Our loving son picked up the task that had outlived his father. My beloved son, Iisax, followed the clues that his father had left for him, but Iisax's days were also numbered. It was Shirazad, Iisax's daughter, who found the moon that I had hidden away nearly a thousand years before her. It was Shirazad that handed my moon over to the Council of the Crescent Moon. It was the Council that set my moon free.

I started over, determined to do to Evil what I had failed to do before, but where could I be the one who stood against evil and made a difference?Then it came to pass that the Council of the Crescent Moon saw a vision of the Green Jinn. So I tested the heart of the man who was to become its captain.

As I recall, it all started with a mystical dream. I awoke from that dream only to find that we had a mission the Five Moons could not handle. Can you even believe that? The Five Moons. So it was that my father brought me over the quantum portal to a secret - a whole new ship - the Green Jinn. Everything about the Green Jinn was an illusion, and nobody even knew that she existed. Admiral Dallas Blake made me captain of the Green Jinn. I am Chon ko Gonin.

That was how the Green Jinn began its first mission - to hunt down the worst interplanetary crime boss that ever existed, David Zharn. He was so far beyond evil that even Admiral Johnson herself could not nail this scum, but we would not let Admiral Johnson down. It all started out with the best of intentions. That is when everything went sideways.

What listeners say about Dragon Eyes