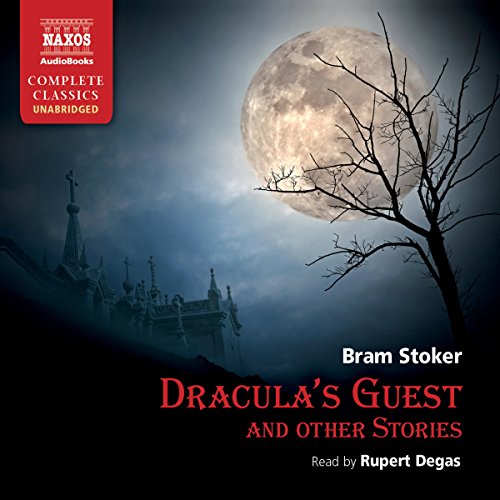 Dracula's Guest and Other Stories

Rupert Degas demonstrates that he was the perfect choice of narrator for Bram Stoker's collection of macabre short stories. Degas's graceful use of pauses adds a deliciously suspenseful edge to each work. With impressive versatility, he fluidly transitions from harshly accented peasant to appropriately haughty nobleman. With a dramatic flair, he expertly delivers both hushed tones and frenzied exclamations. Degas is guaranteed to make listeners' hearts race even when they already know what's coming. His performance of these superb classics will enhance its appeal for any fan of nightmare adventure.

Best known for his masterpiece of horror, Dracula, Bram Stoker wrote a number of other novels and many short stories, all on supernatural themes or filled with a physical terror reminiscent of Poe. "Dracula’s Guest" was originally part of the great novel, but was excised and published separately. Some of these stories, such as "The Squaw", "The Judge’s House", and "The Burial of the Rats", rank very high among classic tales of the macabre. These stories deserve to be better known for the light they shed on the enigmatic author of one of the world’s supreme literary adventures into the realm of nightmare.

What listeners say about Dracula's Guest and Other Stories