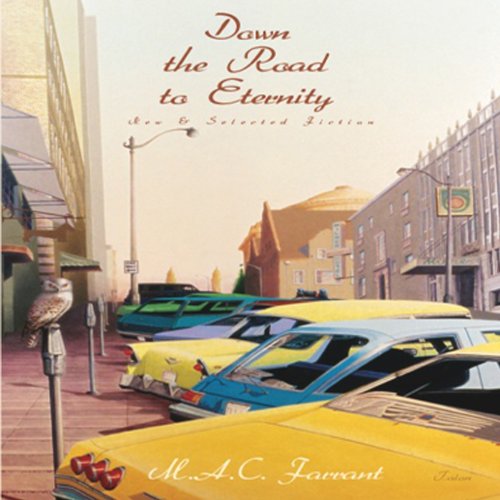 Down the Road to Eternity

By: M. A. C. Farrant
Narrated by: Karyn O'Bryant

Explaining a sneakily unforgiving world through dry, satirical, lyrical, and pointed observations, this collection of character portraits showcases the short fiction of Canadian storyteller M. A. C. Farrant. The (Toronto) Globe & Mail lauded Farrant as, "...better at startling us with unnerving, often misanthropic, visions of everyday life than perhaps any other Canadian writer." Veteran performer Karen O’Bryant brings to life the singular humanity of the many characters, conjuring smiles with a narration that enhances the interplay of the author’s word choices and defines shifting perspectives of little hope but much humor.

Down the Road to Eternity: New & Selected Fiction is a collection of M.A.C. Farrant’s work dating from 1985 to 2009. Compiled of selected fiction from Sick Pigeon (1991), Raw Material (1993), Altered Statements (1995), Word of Mouth (1996), What’s True, Darling (1997), Darwin Alone in the Universe (2003), and The Breakdown So Far (2007), it includes her complete new suite of 18 stories, “The North Pole”, where our individual existence is bludgeoned by the threat of “end times” - climate change, species extinction, pandemics and really bad politics. Each of these stories is an ongoing instance of the author’s attempt at understanding language ironically, a search for the strikingly sublime in the awesomely absurd.

Objective reality in our culture has become a corporate performance of make-believe, and the disassociation and confusion this causes in our private lives often triggers uncontrollable tragi-comic effects in Farrant’s characters - a vacuous lethargy and/or a destructive violence they act out in a context of the most excruciatingly bright banalities imaginable.

Satiric and philosophical in approach, indelibly marked by wit, humor, irony, playfulness, a blend of parody and science fiction, irreverent analysis and comic existentialism, these stories celebrate the literary imagination as an antidote to the stranglehold the popular media now has on the public’s imagination. Yet as in all such relentlessly absurdist dystopian social parodies, there resides behind each of these brief entertainments a stifled scream for help, a trapped yearning for the awe and wonder of what we have become estranged from, an arrested lust for meaning.

Unsparing in her critique of the branded New Age syncretism our global culture has substituted for authentic human emotion and particular belief, these hilariously off-side stories navigate Farrant’s exploration of the relation of fiction to the evolving construction of reality in our media and information age.

What listeners say about Down the Road to Eternity