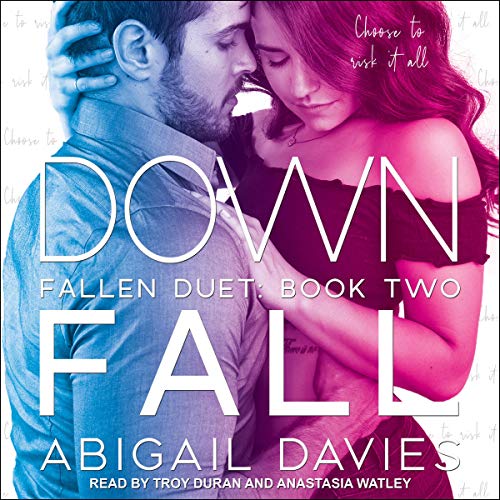 Life was chaotic and unpredictable; made up of a series of events - a collection of firsts. First crush. First kiss. First love.

Between the murky waters, I'd found salvation. And it was all because of him - the broody alpha who appeared at the time I needed him most. He promised me things and showed me the life I could have. But all it took was one moment to destroy everything.

I wish I could say I wanted to take it all back, but it'd be a lie. A blatant lie.

He was my biggest downfall, but I'd never regret it. Choosing him was never an option; the question was whether he'd risk it all.

What listeners say about Down Fall

am in love all over again like frfr.....plz read book 1 first. I cry when it was over.

The male narrator was fantastic. The female wasn't bad by any shot but was as good. I enjoyed this quick read/audio.
You can finish each books in a day. like it. Then forget it

The concluding part of the Fallen Duet by Abigail Davies is absolutely brilliant!
There’re so many fantastic characters (good and bad), and that together with the gripping storyline had me well and truly hooked. I alternated between reading and listening to the audiobook and I must give credit to the narrators who did a fantastic job of bringing the characters to life. I can’t wait to start the next duet in this amazing series. I highly recommend it!

This review has ** spoilers**
Although I have nothing against the author’s style of writing ( since I’m the last person to criticise people in that regard ), I must say the second part of the story has spoilt the whole book for me. I can’t in good conscience, condone what went on between H and h. It’s just wrong...