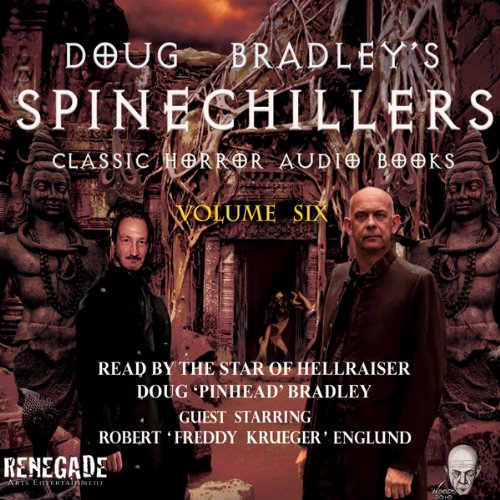 Welcome to Doug Bradley's Spinechillers, Volume Six, part of the world's largest collection of high-quality, classic horror audiobooks. Are you ready for our latest installment of enthralling horror masterpieces? Good, then we'll begin with Doug's well researched and passionate introduction to the authors and stories in this volume. This is closely followed by his literary majesty, Edgar Allan Poe, with the well-known and classic tale "The Pit and the Pendulum", a visceral account of a man's torment in the prisons of Toledo, during the Spanish Inquisition. Waking in a world of sensory deprivation and disorientation, Poe takes us through every spinechilling detail of terror as the prisoner seeks to evade his captors inventive attempts to end his life.

Catch your breath before an English storytelling legend, Rudyard Kipling's "The Mark of the Beast", which will take you along a mist-bound trail for a soldier's tale of the British Empire stationed in colonial India - and werewolves.

Then, we are proud to unveil our first guest reader, none other than the original - and in our terrified imaginations, the only - Mr Freddy Kreuger himself, Robert Englund. His first Spinechiller reading mesmerizes as he brings us "An Occurrence at Owl Creek Bridge", Ambrose Bierce's famous American Civil War tale. He paints a tantalizingly clear picture of a man's execution and his fantastical escape.

Next up is H. P. Lovecraft's "The Rats in the Walls", a wonderfully chilling story of a descendent's gruesome discovery of the true evil of his family's ancestry.

Volume Six comes to a close with a poem by John Milton Hayes, inspired by the work of Kipling. "The Green Eye of the Little Yellow God" is well known for its opening and gives an overall feel of ironic justice. So stoke those logs, dim the lights, sit back, and relax as the masters of classic horror fill your imagination with tales conjured from beyond our mortal coil.

I picked up Volume One right before Halloween, largely because I saw that he did a Lovecraft story in it and I was immediately enthralled.

First of all, Doug Bradley is a gifted narrator, he does an amazing job and really keeps you glued to the storyline.

What's more, Renegade Arts does a terrific job enhancing the story with mood music, sound effects and the like.

What makes volume six superior to the others (in my opinion) are two things: The content and the guest narrator.

It starts with "The Pit and the Pendulum" which is a classic in its own right (although not my favorite Poe story).

The second story, "The Mark of the Beast" is remarkably well told, with an interesting story line that is interesting in and of itself but even more so if you take the time to listen to Bradley's introduction so you can understand it and put it in historical context.

What really sold me were the third and fourth stories, "An Occurrence at Owl Creek Bridge" and "The Rats in the Walls" as well as the guest narrator, Robert Englund (who narrates "An Occurrence."

With regard to Englund, I was a bit skeptical because I like Bradley so much but I can tell you that the selection of Englund was perfect for this piece which is not only compelling but haunting and really makes you think. The plot and story are remarkably simple but the telling will leave you thinking about it for days. I will not spoil it for you but buy it and listen for yourself!

As I alluded at the beginning of this review, I adore Lovecraft and "The Rats" is an absolute masterpiece. Lovecraft's mastery and use of language are enough to make this a first rate story. It is the kind worth listening to just to absorb his dense, masterful prose.

Buy it, you will not be disappointed!

These stories kept my attention. Each one had a unique angle to keep your attention.

Hands down my favorite of the series

There are two amazing parts of this one. 1st is the rendition of H.P. Lovecrafts "The Rats in the Walls". I was apprehensive of a recording of this because of some subject matter. It was addressed at the beginning of the recording and taken care of in a manner I though was not only appropriate but also did not take away from the story.

The second was Mr Englund's rendition of "The Occurance at Owl Creek Bridge" I am not a fan of Ambrose Bierce but this is one of the few stories by Bierce I enjoy and this rendition was amazing.

This audio book is a continuation of the previous volume’s success.
Amazing stories from well-known authors are combined into this Halloween treat for the ears. The narrator was perfectly chosen to create an eerie nature. This effect is further enhanced by subtle sound effects that match the events of the story. This audio book is was worth every penny, and will made any October feel more festive.

this series of classic stories that are read by well known actors Doug Bradley and Robert England are creepy and entertaining stories to listen to. I love to listen to audio books, I love reading/listening to horror stories on a cold gloomy evening.