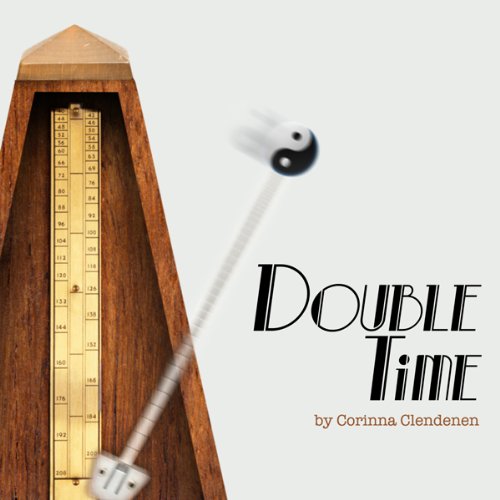 Could you use another life? This is the story of a woman who has the courage to reinvent herself. Heirs to the Jackson textile mill, designer Dani and her singer/songwriter twin Dylan feel free to follow the siren call of the music world - until they’re interrupted by a car accident. With Dani behind the wheel, her father ends up on a stretcher. Youthful free spirits cut short, Dani swaps her fringed jacket for a business suit, the Red Hot Chili Peppers for the Brandenburg concertos.

Marrying attending physician Gunner Nygård seems a good move until a fertility quest reveals his hidden agenda. But the golden handcuffs of Dr. Gunner can’t hold Dani forever. Overworked and under loved, Dani hears a new tune, one that leads her where few will dare to follow.

Imbedded in this audiobook, seven songs underscore the unfolding events of the novel’s seven parts. Throughout, music is the freeing agent, the energizing constant, the consoling balm.

Double Time is a love story, set to music. With special thanks to the musicians, publishers, and recording studios whose cooperative efforts paved the way for the inclusion of the following songs: "Oxford Comma" by Vampire Weekend, "Ain’t Nobody’s Business" by Susan Tedeschi, "Daniella" by The John Butler Trio, "Polaroid Solution" by Faded Paper Figures, "Not Your Lover Anymore" by Blitzen Trapper, "Vienna" by Matt Costa, and "Untold by Pete Francis".

What listeners say about Double Time

This is the first time I've listened to an audiobook and really felt that the audio production had enhanced the story in a way not possible on the written page. The story - about a woman with two husbands - is told by a patchwork of voice actors and structured around a playlist of songs that feels right at home in the world the author has created.

Dani, the protagonist, is a fascinating character - after her life is turned upside down by a car accident, we follow her through the twists and turns that lead her into a double life.

We learn about her family's aging textile mill, her rebellious indie singer/songwriter brother, Dylan, her awkward (and also very funny) first husband, Gunner, and his preoccupation with fertility (he's a doctor), and her second husband's exciting life as a rock-climbing guru.

Every stage of Dani's journey is told with rich and absorbing detail - you won't want the story to end!

A great find - and a great listen.

Double Time does double duty, in delivering a great story and some terrific performances, both in the narrators and the music. The characters are all so different in how they sound and what they say, it feels like you're hearing about a situation from a bunch of entertaining mutual friends.
Dani's life swings back and forth and back again in an interesting and believable way, from the city to the country, from care-free to workaholic, from a stuffed shirt suitor to free-wheeling Anthony Kiedis. I'm a long-time fan of the Red Hot Chili Peppers and Clendenen does a great job of portraying Kiedis in a fictional role. The music hall scene totally evokes an RHCP concert- you feel like you’re there.
The songs you hear as the book proceeds provide great musical intermissions and are well-suited to its themes, particularly the notion of giving women the same freedom as men.
Great story, cool listening- a really fun audiobook.

I absolutely hate having to give a bad review to someone's work, but feel obliged to here, so that others can avoid stumbling into the trap I fell into. Please note that there is not one review of this book here from a legitimate book critic, and I suspect that the book is self published... for a reason, people.

The writing is completely amateurish -- nothing happens from the beginning of a chapter to the end, there is no depth whatsoever in the story, and, when I finally gave up after two hours, I wanted my time (and my money) back. I cannot believe I wasted a credit on this. You can find it on Amazon for three dollars and change. Sorry. I always hope to like a book, but this one was awful.

Double Time is a gem!

Double Time scores a 10 for sheer entertainment. On top of that, the author, with insight and wit, has created characters from our life and times, and projected them into circumstances that test their--and our--convictions about family devotion, sexual double standards, marriage, personal and ethnic identity, and more.
The story is as well woven as fabric from the Jackson family mill. The tale unfolds through the voices of eight characters and a narrator, and the appealing readers/actors have you hooked from the get-go. Partially set in the music world, the author "scores" the production with seven songs that deftly set the tone. I listened to the book while on a road trip and couldn't turn it off.
Double Time would be a perfect reading group selection.