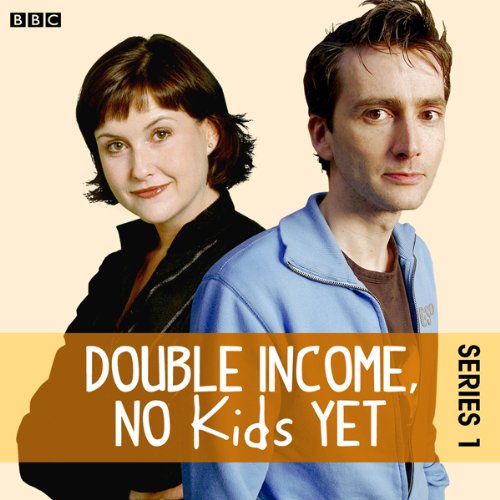 Double Income, No Kids Yet: The Complete Series 1

David Tennant (Doctor Who) and Liz Carling (Casualty) star in the sitcom about a young couple, Daniel and Lucy, and their circle of friends.

In the first series, Lucy sets up Daniel's party, but their mates seem too busy with kids. Then, when a top author gets writer's block, Lucy and Daniel get landed with an unwelcome guest. In the third episode, Daniel and Lucy's plans for a quiet weekend are hit by a stream of unplanned visitors and are later hit by other people's baby blues. Is poker really the answer? Lucy's up for promotion, but Katie can't decide on naming her baby. And in the last episode, when they're asked to be godparents, Lucy's thrilled. The same can't be said for Dan, however. This series was first broadcast in 2001.

What listeners say about Double Income, No Kids Yet: The Complete Series 1

What did you love best about Double Income, No Kids Yet: The Complete Series 1?

I loved the humour, the characters and the way the series was presented. You can listen to it in episodes or as a whole, I loved the whole thing!

I think the English humour in looking at daily problems. There was a lot that could be related to for audience members of all ages and genders.

Everything, particularly David Tennant with his quirky way of speaking and singing.

What a wonderful way to get the house clean

I got this because of David Tennant, but the story had me listening all weekend - I got 2 and three just as soon as I finished one - I don't want to give anything away, but the main characters went through the same problems as my daughter and son-in-law, and I can't tell you what joy it gave me when everything worked out for the characters, just like it did for my children. I highly recommend this for any twenty somethings and for us who are older and still know what is like to be starting out

I found this show when I was a bored teenager and it really scratched the narrative itch that I had at the time. Now as an adult I was delighted to find it here. It is still very funny with terrific acting. It really is a good example of how to make an absorbing radio show. It was also nice to see an example of a long term relationship in a show, rather than the formation of one. We get to see the narrative potential is such a situation. Some of the humour felt a touch dated but overall it is an enjoyable and highly recommendable listen. All the actors perform seemingly effortlessly and distinctly, hitting the right level of comedic delivery.

One of my favourite all times

If you could sum up Double Income, No Kids Yet: The Complete Series 1 in three words, what would they be?

What was one of the most memorable moments of Double Income, No Kids Yet: The Complete Series 1?

all of it, the interaction, sound effects, like watching a play

How did I miss this

What does the narrator bring to the story that you wouldn’t experience if you had only read the book?

The delivery of a radio play doesn't always work as well upon reading it.

Remember the joy is to able to give them back

I wondered how I missed this play the first time. On radio
An total joy. David Tennant and Liz Carlye are spot on in their delivery.

As I am a single income and no kids yet. I can honestly say that stories episodes told in this story maybe the extreme but not that far off at all.

Very funny and real to life, plus you get to listen to the lovely David Tennant :)

What was most disappointing about David Spicer’s story?

Expected it to be funny and satirical felt empty

Did Double Income, No Kids Yet: The Complete Series 1 inspire you to do anything?