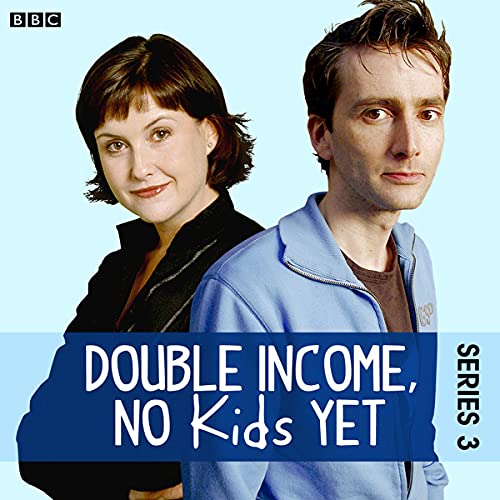 Double Income, No Kids Yet

David Tennant (Doctor Who) and Liz Carling (Casualty) star in this sitcom about a young couple, Daniel and Lucy, and their circle of friends.

In the third series, Katy's a mum at last, Daniel's got a new job, but Lucy's jealous. Daniel and Lucy rethink their priorities on a golfing break with their awful friends. And change is all around, but Lucy doesn't realise that Daniel can't keep secrets.

Pregnant Lucy must also break the news to her parents, Daniel gets a taste of fatherhood, and have Daniel and Lucy finally had enough of dealing with other people's problems? This series was first broadcast in 2003.

What listeners say about Double Income, No Kids Yet

Lighthearted gets dark, and fades to gray

This I believe is the last in the series of a modern radio play about a couple who manages to stay childless while all their friends and family manage to have demanding monsters for children (being a form of birth control). I love David Tennant's voice, that was half the joy. Not to give too much away, but for most of the series the story it's light and somewhat comical as everyone's life around them is going to bit. However, tragedy does strike our brave couple and it is serious and deep drama. I felt deeply for the characters. even though some were on the verge of being spineless ninnies not worthy of thought or care.

Roller coaster of emotions, and writing that cannot be beat.

This was the best radio program/radio play I’ve ever heard. The writing was lovely and constantly funny. The witty dialogue kept me engaged. And the touching emotional performances of the main two kept my on my toes. I am going to miss this now that it’s over.

Such a funny, sweet show. a joy to listen to and the characters were awesome!

Great program. Listen to it often. Actors are really very good. I recommend it.

I've been a fan of this particular radio gem for a number of years. Witty and at times poignant, this third instalment of Double Income No Kids Yet really delivers. It pulls very few punches but leaves you smiling. Far from being the light fluff of series 1 and 2, series 3 brings an edge to the laughter that bites, stinging with reality.

Definitely worth a listen.

Sitcoms are always going to be difficult to write and original ideas are hard to come by but tjis is why this is so good. Almost social outcasts, their different perspective on life is great. The acting of course is first class as you would expect from Liz Carling and David Tennant

Enjoyed from stary to finish..loved the chatacters and it fely as if I eas sitting with them

Great fun, with a touch of reality. Love it

Already on my second listen. Loved the humour even around some difficult topics. Perfect easy listening. I wish there were was a next series!