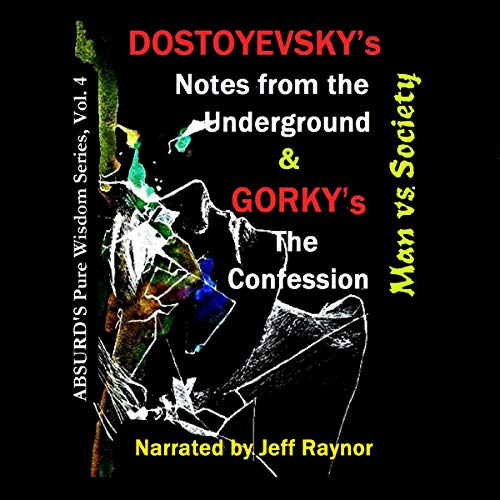 Dostoyevsky's "Notes from the Underground" and Gorky's "The Confession": Man vs. Society

The book includes two literary masterpieces written by two giants in the world literature, Fyodor Dostoyevsky and Maxim Gorky. The contents of the book are Dostoyevsky's Notes from the Underground and Gorky's The Confession.

The Confession is a confession of a man wandering through Russia seeking a philosophy to live by. Notes from the Underground is also a confession of a man who is on the margins of modern society. It examines the effects modern life has on that man's personality - who has gradually gone mad over a lifetime of inability to cope with the society around him.

Notes from the Underground was the first major work of Dostoyevsky. It is considered to be the first existential novel that influenced other literary giants and philosophers such as Jean-Paul Sartre and Friedrich Nietzsche. Dostoyevsky's literary works explore human psychology in the troubled political, social, and spiritual atmospheres of the 19th century. He was a psychologist before psychology was born as a term like now, and his observations were sharp and universal. This novel is still relevant; the themes of the novel - industrialism, utopianism, western markets, the grip of science and technology on truth - are the themes of today too.

The Confession gives insight into some compelling Russian and wider human themes explored by Dostoevsky, Tolstoy, Chekhov, and Gorky himself; these include the roles of the church, the state, and individuals, ubiquitous human questions of love, fear, and death, and the responsibilities people have for one another. The Confession is a first-person account of Matvei, who is abandoned soon after his birth. Matvei, like Gorky himself, is a seeker for truth who learns as he travels. He meets other kindred souls on his way, including a young boy who tells him, “I'm not a tree; I don't have to live my whole life in the same spot.” An old pilgrim he meets says, “It is not right to say to man, ‘stand here', but always, ‘go farther and farther.'"

What listeners say about Dostoyevsky's "Notes from the Underground" and Gorky's "The Confession": Man vs. Society

I loved and can identify with these classic stories. The stories are enjoyable , memorable and are a teachable lesson. The stories may be long but I enjoyed listening to them while relaxing on my couch. I would recommend this book of you love classic literary books. I received this book at my request and I am voluntarily leaving my honest review here of my own volition.

Worst Narrator Ever for This Work

This is a classic. Have no idea why this jaunty-voiced actor/reader was selected to read from the point of view of the Underground Man. Very bad choice.

These two novels are treasure of world literature. they both challenge the ignorance of our society and suggest for a change for good. Very long book, nearly 12 hours. Consistency of Jeff Raynor's performance demands a pat on back. Great job.

A must listen audio-book that includes two of the greatest books in litterateur history. Dostoevsky and Gorky need no introduction. Great performance from Jeff Raynor.