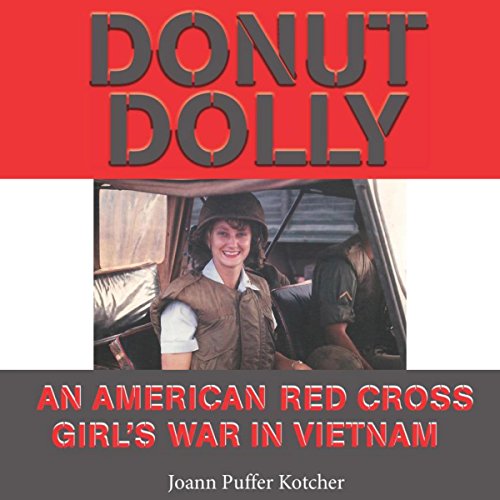 "Donut Dolly is an engaging and useful account of an almost totally ignored facet of the Vietnam War. Kotcher and her colleagues attempted to make life more bearable for the soldiers and airmen engaged in the war, and along the way, her insights are fascinating." (G. L. Seligmann, coeditor of The Sweep of American History)

Donut Dolly puts you in the Vietnam War face down in the dirt under a sniper attack, inside a helicopter being struck by lightning, at dinner next to a commanding general, and slogging through the mud along a line of foxholes. You see the war through the eyes of one of the first women officially allowed in the combat zone.

When Joann Puffer Kotcher left for Vietnam in 1966, she was fresh out of the University of Michigan with a year of teaching and a year as an American Red Cross Donut Dolly in Korea. All she wanted was to go someplace exciting. In Vietnam she visited troops from the Central Highlands to the Mekong Delta, from the South China Sea to the Cambodian border. At four duty stations, she set up recreation centers and made mobile visits wherever commanders requested. That included Special Forces teams in remote combat zone jungles.

Donut Dolly is Kotcher's personal view of the war, recorded in a journal kept during her tour, day by day as she experienced it. It is a faithful representation of the twists and turns of the turbulent, controversial time. While in Vietnam Kotcher was once abducted; dodged an ambush in the Delta; talked with a true war hero in a hospital who had charged a machine gun; and had a conversation with a prostitute. A rare account of an American Red Cross volunteer in Vietnam, Donut Dolly will appeal to those interested in the Vietnam War, to those who have interest in the military, and to women aspiring to go beyond the ordinary.

I personally never actually spoke to the donut dolly always really wondered why they were there this book is very enlightening to me I was stationed in Anka Kaye Vietnam so I have some knowledge of what wnt on in the area.

This is an interesting story about one woman's service in Vietnam. Unfortunately excessively patriotic at least as far as I'm concerned though understandable bearing in mind the author's role was pseudo military. If you recall the British comedy telebision series from the mid seventies 'It Ain't Half Hot mu' well this is similar in that the Red Cross girls provided distractions for the serving soldiers in vietnam and entertainment for them. The narator though was disappointing. It sounded like a synthesizer was doing the work and the microphone was not of the best quality. it sounded as if the reader was virtually swallowing it. Still if you can get over that it's worth a read I think. If you like personal acounts you'll like this one.