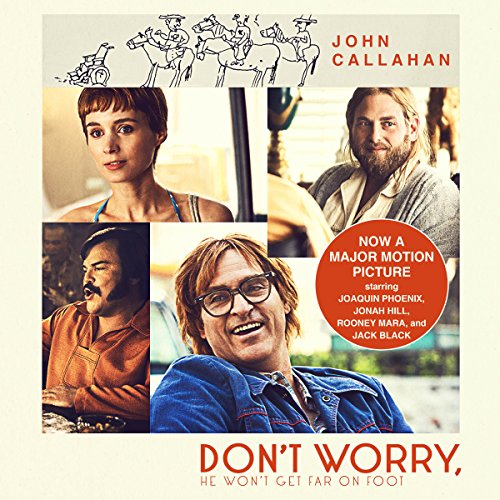 Don't Worry, He Won't Get Far on Foot

In 1972, at the age of 21, John Callahan was involved in a car crash that severed his spine and made him a quadriplegic. A heavy drinker since the age of 12 (alcohol had played a role in his crash), the accident could have been the beginning of a downward spiral. Instead, it sparked a personal transformation.

After extensive physical therapy, he was eventually able to grasp a pen in his right hand and make rudimentary drawings. By 1978, Callahan had sworn off drinking for good and begun to draw cartoons.

Over the next three decades, until his death in 2010, Callahan would become one of the nation's most beloved - and at times polarizing - cartoonists. His work, which shows off a wacky and sometimes warped sense of humor, pokes fun at social conventions and pushes boundaries. One cartoon features Christ at the cross with a thought bubble reading "T.G.I.F". In another, three sheriffs on horseback approach an empty wheelchair in the desert. "Don't worry," one sheriff says to another, "He won't get far on foot." Don't Worry, He Won't Get Far on Foot recounts Callahan's life story, from the harrowing to the hilarious.

What listeners say about Don't Worry, He Won't Get Far on Foot

First of all, the narrator couldn't have been more perfect for the subject matter. Incredible delivery and a perfect voice for the material. Second, I read the book in high school. I was a wanna-be cartoonist and someone gave me the book and I was amazed someone paralyzed could find a way to draw. I immediately responded to John Callahan's irreverent humor and became more intrigued with his personal life than with his cartooning career. There was some mention of his process in a later chapter regarding cartooning but the majority of the book is about Callahan's struggle to overcome alcohol addiction and find peace with his past and I was hooked reading it cover to cover in no time. 25 years after I first read the book I revisit it as an alcoholic myself. I had forgotten all about John Callahan over the years until I heard a movie based on the book was coming out and it all came back to me and I got the audible version and listened to it straight through. This is not just a recovery diary. John Callahan's life story is for anyone since it is ultimately an uplifting and touching example which proves where there's a will there's a way and nothing can snuff out the human spirit.

I discovered John recently - having seen the cartoon quads on TV many years ago.

i never forgot that and after googling it found out who was responsible.

i've bought a few of his bools since.

Anyway this Autobiogtaphy is really good.

John is like one of those charactors that you may meet in life - a bit of an outsider.

it's a compassionate modest and gentle story of a man who certainly with bravery faced his challenges and who was able to survive his situation and be creative - it's a quite moving listen, smattered with self deprication and humour.

i've listend to it a couple of times now amd John now sits along with Bukowski, Van Gogh, philip k Dick and Mike Judge in my affections.

it's well read and i'm grateful it got made into an audio book.

it was turned into a film, but i have not yet seen it.

if you like individual outsider types then this is great and i would highly recommend checking out his work in general.

I would have liked to have known John personally and as with any good book that you connect with - in a funny way I do!