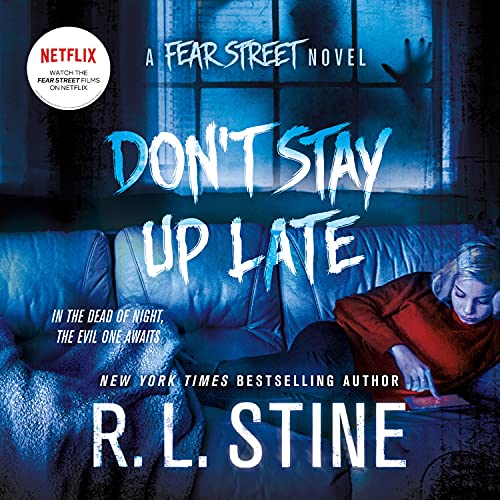 R.L. Stine's hugely successful young adult horror series Fear Street is back after almost two decades. Fear Street is a worldwide phenomenon and helped to kick off the young adult craze, which is still going strong today. Now, R.L. Stine is back with new books in this series, and the news of the series returning caused a flurry of excitement both in the press and on social media.

In the second new audiobook in this series, Don't Stay Up Late, Stine explores the unbridled terror of a damaged young lady sent on a doomed babysitting job.

Ever since a car accident killed her father and put Lisa and her mother into the hospital, Lisa can't think straight. She's plagued by nightmares and hallucinations that force her to relive the accident over and over again in vivid detail. When Lisa finds out that a neighbor is looking for a babysitter for her young son, she takes the job immediately, eager to keep busy and shake these disturbing images from her head. But what promised to be an easy gig turns terrifying when Lisa begins to question exactly who - or what - she is babysitting.

R.L. Stine makes his triumphant return to Shadyside, a town of nightmares, shadows, and genuine terror, and to the best-selling series that began his career writing horror for the juvenile market in the new Fear Street audiobook Don't Stay Up Late.

What listeners say about Don't Stay Up Late

i struggled to finish but it was a good audio book, I would highly recommended

I grew up on RL Stine books and loved every one. I loved them because they were so real and paralleled real life. They were exciting mysteries without the sci fi of the goosebumps series. This book begins as a great murder mystery and then at the climax it goes sci fi, I was so disappointed. It is certainly not of the caliber of his early books.

This book was Fear Street meet Goosebumps. It started off good, then jumped to Goosebumps and I almost gave up on it and stop listening because I'm a Fear Street kid not a Goosebumps kid but I'm glad I listen all the way through. It actually turned out to be a pretty good read. I loved the very end. Also the narrater is one of my favorites so of course she did a wonderful job. I think it's worth a credit.

I enjoyed this book very much! I know it’s for young adults but I was on the edge of my sit listening to this book! Am now a New fan of R.L. Stine!🤩🥰👏🏾👍🏾!

Enjoyed it, kept me entertained all day. The Voice actress was good, writing was good too

I really enjoyed this book. very intertaining from beginning to end. loved it so much.

nice teenager book to listen to

I kinda wish it would’ve explained more why they were raising a demon and what the entire family’s roles were but all in all a good story! Brittany Pressley is an amazing narrator!

Always been a fan of R.L. Stine and this story did not disappoint me! From start to finish

I'm not a teen but I enjoyed this book. My niece read the physical book and I listened to the book together . She finished it before I did !! She really enjoyed it too.

Scary,makes you feel like someone is in the room watching...
But it's a little bit too scify but it's good

Very good story, well narrated. Like to read this series, but also works well as an audio book