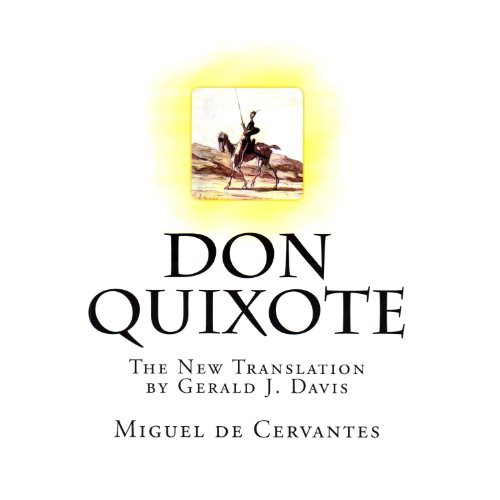 Don Quixote by Miguel de Cervantes, follows the adventures of Alonso Quijano, a hidalgo who reads so many chivalric novels that he decides to set out to revive chivalry, under the name Don Quixote. This is the story that a Nobel Prize Committee survey of one hundred of the world's best writers named "the greatest book of all time."

What listeners say about Don Quixote

Disclosure: I received this audiobook for free as part of a promotion on Goodreads

First a confession: I usually use the Audible app's variable speed feature to listen to Audiobooks slightly sped up (1.25x). I started listening to Gerald J. Davis' translation of DON QUIXOTE slightly sped up and then stopped, reset the speed to its default (1x) and started listening again at the beginning. Why? Between the story itself (as an avid reader, I loved reading a parody about an avid reader), the translation (poetic without making syntax unnatural or complex), and John Hanks' narration (perfect timing and inflection, with wonderful character voices), I didn't want this audiobook to end. The story itself, of course, is a classic and I'd picked it up for Kindle previously but never got around to reading it. I'm glad I heard this translation and especially as an audiobook: There are some audiobooks where the narrator is paired so perfectly to the content that the listening experience is magical... this is one of those rare audiobooks. Highly recommended.

'Don Quixote' is a book that has long been on my "To Read" shelf. I had such high expectations for the literature that I was afraid that it may fault short and leave me disappointed. I could not have been more wrong. The translation of this text was very well done; I read along on my kindle as I listened. The story was everything I could have hoped that it would be, full of "giants" and "wrongs" that needed obvious "righting". I had watched the movie Man of La Mancha many times in my youth and so I had somewhat of an idea about what the story was about, but obviously the book was much more in depth.

Don Quixote was just the sort of character that I had imagined that he would be--unpredictable, full of chivalrous notions, and absolutely mad. However, Sancho surprised me. I had thought he'd end up being a kind-hearted, voice of reason for the mad Knight of the Ill-Favored Face. Nope! Nope! Nope! Sancho, though not as mad as his master, was easily suckered into Don Quixote's fantasy with promises of fortune and fame! So wrapped up was he in the idea of gold and glory that he was willing to convince himself of any delusion that his master concocted. It was quite amusing seeing Sancho struggle between the 'truth' and reality, especially when the 'truth' said that he could steal the donkeys of Knights and squires (very confused monks) in combat.

The story was very long, but it was broken into easy chapters. It is less of one flowing narrative, but more a series of adventures that the two characters had faced. However, each story somehow connects to the ones that had previously been told, so it ultimately does wrap into one big story. However, since the story is broken down into these adventures and relatively modest chapters, the book went by very quickly. I was surprised that have finished reading and listening to this tome within a little more than a week's time. So, while the book itself is quite long, it flew by quickly.

Now, as for the audible performance of the book. I was very pleased with John Hanks as the narrator. He had a very lively, but pleasing voice for story telling. He also did his best to make every single character unique in voice. Although some did end up sounding similar (he is only one man, after all), the most important characters had very distinctly different voices. At no point was I confused about whether Sancho or Don Quixote was the one talking, because the two had very unique voice acting. This made it so much easier to slip into the story and all together forget the narrator as I was reading. He even did female voices well, although many of them did have a very similar quality. I would absolutely recommend this book, as well as the narrator to others.

Don Quixote - A Classic but Better

Story: This is one the books I never got around to reading much less reading its summary. Even as translated work and over three centuries old, it is remains remarkable as a comedy.

this book is such a precious piece of art, regardless of time it shines thru history!
i'm mesmerised with Don Quijote's valor, and his endless dream world.

the narration is very well done. I could feel that Don Quijote is speaking and acting right in front of me!

p.s. i recommend this audible version!

No wonder it's a classic!

A wonderful story well performed. A couple times the there was recording issues but those where few and brief. An awesome book for at work. I found my self exclaiming particular excerpts to the dismay of my co-workers.

I very much enjoyed the acting of the different characters portrayed in the story. since it is 20 hours I was really worried that the voice might not be pleasing, but it was very much entertaining.

As an English major, I was familiar with the story of Don Quixote. I had read parts of the book for class, but never the entire book. I have a new appreciation for this text after listening to the audio version. This book is hilarious and I can imagine it was ahead of its time when it was originally published in 1605 and 1615. Quixote has a mental break-down after reading too many novels about chivalrous knights and sets out on his own knightly quest. Quixote sees what he wants to see (like a castle and a noble family instead of an inn and the innkeepers family). He meets each situation through chivalrous-colored glasses and that doesn't always bode well with the people or situations around him. There are so many one-liners from Quixote that made me laugh out loud. I listened to the very end to hear what befell Quixote at the end of his adventures. The narration was perfect for the story and easy to listen to. I was given this free review copy audiobook at my request and I have voluntarily left this review.

I tried.I guess I'm not a normal reader.I didn't find it that funny or understandable.I was given this free review copy audiobook at my request and have voluntarily left this review.'

A collection of very old jokes

This is historically such an important book that you just have to read it at some point. But a lot has happened in 400+ years.

Clever AF and revealing. From debates that are similar to postmodernism versus science, men versus women and everything in between, DW has it.

As soon as The Narrator started gurgling on ! I Knew it was a mistake , I could not take more than 30 minutes