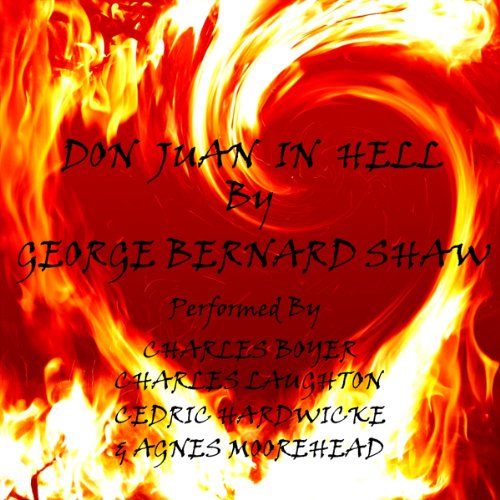 The play Don Juan in Hell originated as Act 3, Scene 2, of Man and Superman and is a spirited debate between Heaven and Hell. It was written by Irish playwright and a master of social commentary George Bernard Shaw (1856 – 1950), who is probably most famous for Pygmalion amongst his 60 plays. Shaw was the only person to ever win a Nobel Prize in literature and an Oscar.

This famous performance features Charles Boyer as Don Juan, Charles Laughton as the Devil, Cedric Hardwicke as the Commander, and Agnes Moorehead as Doña Ana.

What listeners say about Don Juan in Hell

extraordinay rendition of a fascinating story

Where does Don Juan in Hell rank among all the audiobooks you’ve listened to so far?

very high up indeed. the story itself is fasccinating an intensely thought provoking. the performers have got deep into their respective characters

What other book might you compare Don Juan in Hell to and why?

for ideas and phiosophy - gibran's prophet and wanderer.
for performance - code of the woosters by wodehouse

don juan's character, possibly because of hs nationality, has an accent that was not fully clear at times

I ❤️ Bernard Shaw. Was Custodian of & lived at his home for 8 wonderful years and as a Shaw specialist I am very particular about interpretations of the writers plays. This is a superb production, Charles Boyer is excellent & understands the character Don Juan, as do the rest of players. This is a brilliant performance, a talky piece rather than a general drama and brilliant theatre. exactly what GBS intended.