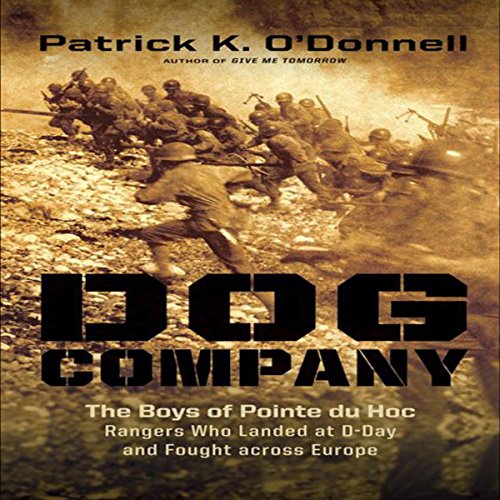 It is said that the right man in the right place at the right time can mean the difference between victory and defeat. This is the dramatic story of 68 soldiers in the US Army's Second Ranger Battalion, Company D - "Dog Company" - who made that difference, time and again. From D-day, when German guns atop Pointe du Hoc threatened the Allied landings and the men of Dog Company scaled the sheer 90-foot cliffs to destroy them; to the slopes of Hill 400, in Germany’s Hürtgen Forest, where the Rangers launched a desperate bayonet charge across an open field; to a "quiet" section of the Ardennes, where Dog Company suddenly found itself on the tip of the spear at the Battle of the Bulge; the men of Dog Company made the difference.

America had many heroes in World War II; however, few can say that, but for them, the course of the war would have been very different. The right men, the right place, the right time - Dog Company.

Patrick K. O’Donnell is the award-winning author of eight books, including the highly acclaimed account of the Battle of Fallujah We Were One. He has provided historical consulting for Band of Brothers and multiple documentaries. He lives in Austin, Texas.

"A great American writer." (Clive Cussler)
"The author’s most important accomplishment among many is to put a human face on the troops who are fighting against some of the fiercest enemies America has ever encountered.… Read O’Donnell’s excellent book." ( New York Post on We Were One)

What listeners say about Dog Company

On par with the best; Band of Brothers, etc

A quick introduction to my ratings...everyone has their own views so you should know what mine are so my review may be of help
***** - 5 Stars, an all time great that I would want to read every year
**** - 4 Stars, a good book that I would be willing to read again
*** - 3 Stars, an average book, glad I read but would not read again
** - 2 Stars, I finished but was sorry I did and would not recommend it
* - 1 Star, i could not even finish it

Recommendation - If you like military history, i.e. books like With the Old Breed, Band of Brothers, etc, I highly recommend this book.
Overall,this book is another tribute to the brutality of war and the hearts of the WWII generation. They speak of many battles as the summary describes. It is not sugar coated, the author pulls no punches in romanticizing war.

Best
1. The description of life in battle pulled no punches. The author also expanded on the quotes, attributing them to the interview or source, so the reader knows they were not the author's narrative, they were from interviews, 1st hand accounts. I appreciate that as many authors like to add to it.

2. I enjoyed the ending when the author spoke of what came of the members of Dog Company, it is good to hear how their lives ended up!

Least
1. There is little to say here. I would have enjoyed more background to what was going on big picture, not just the 1st hand accounts, but that would have made for a much longer story.

2. There really was nothing major I did not like about this book. It will come down to personal preference.

A solid work on a specific topic

As with most works with a single focus, it can get a bit repetitive. That being said, it is a solid story that tells the story of a unique time and of a unique unit. All of these stories need to be told and listened to. Those that were actually there deserve our attention and understanding to what is really their story.

This was first time with this author. A pretty good performance, but as with most US narrators, I found his pace a touch slow. Maybe that's just me.

Would you listen to Dog Company again? Why?

I would listen to dog company again because the characters are well drawn and more importantly, real. The author and narrators do a wonderful job of incorporating vivid descriptions of the actions and first Person memories of some of the men involved.

Would you ever listen to anything by Patrick K. O’Donnell again?

Yes, i heard him bring interviews on pubic radio which is what drew me purchasing the audio book. Excellent research.

What does John Pruden bring to the story that you wouldn’t experience if you just read the book?

John does an excellent job of capturing the closeness of the men, their commitment to their assignments. Descriptions of battles were vivid.

The actual landing and climb of cliffs

This is a fascinating book about the US Rangers and the Cliffs they had to climb during the D day invasion.

The men were all heroes and the author Describes it well an almost impossible task.

Wish I could shake their hands. The ultimate in brave, selfless men. I highly recommend. Very realistic .

I amazing when you read these stories along with all of the others and the start to overlap to form a well rounded picture. These men are what men should aspire to be.....The Greatest Generation

story everybody needs to hear

Wow! Courage and resolve that I’ll strive to live up-to. Truly inspirational. If I ever complain of my daily trials!

This had the potential to be such a dynamic story. The history is compelling. The writing was a slog which often took tangents into detail about equipment or history that was only marginally relevant. A shame.

Brave men. Great story. Credit the narrator for an excellent performance. Very much enjoyed this book.

A fantastic tale of true heroes that overcame adversity on numerous occasions.

Listen to this book to keep their sacrifices alive.

The soldiers in this book gave us what we cherish today.

Better performance, less clichés - the soldiers have a great story to tell - it should have been gripping, but it wasn't

What could Patrick K. O'Donnell have done to make this a more enjoyable book for you?

Less use of bombastic & tired clichés.

What character would you cut from Dog Company?