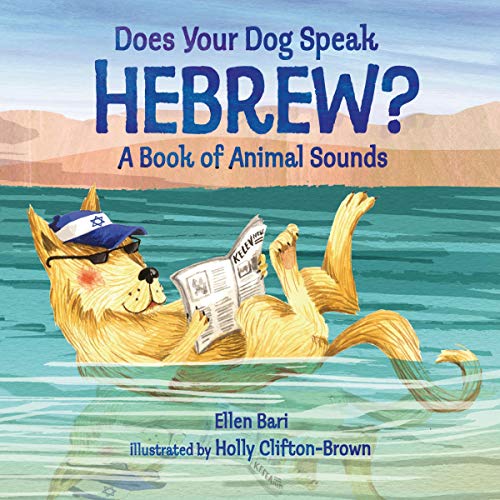 Does Your Dog Speak Hebrew?

A dog says “bow, wow” in English and “hav, hav” in Hebrew. Whimsical animals in American and Israeli settings compare their varied noises and sounds. Listeners can explore which sounds are the same and which are different in droll depictions of animals in Israel and the United States.

Basic Hebrew vocabulary, including animal names and sounds, are introduced. Iconic locations like Capitol Hill and Central Park in the United States, and the Dome of the Rock and the Sea of Galilee in Israel are featured in illustrations.

"OK, what new can you provide with yet another book teaching animals’ sounds to young kids? Turns out if you have a few creative ideas even adults can enjoy this kind of book, that a parent has already seen plenty of. I certainly did, even after practicing animal sounds, bilingually already with my daughters as they were growing up. This book is also bilingual, meaning teaching the animals sounds both in English and in Hebrew. I already saw this kind of book, thus it was not a novelty for me. What surprised me though that the Hebrew versions of the animals’ name was transliterated into English and used in the English sentences, e.g. 'a kelev says, hav hav hav.' Such a simple trick and the child learns a few fun Hebrew words beyond the sounds they make too. The other imaginative idea that I noticed was hiding in plain sight in the background. Each pair of sounds/animals had a representative picture of the two cultures behind them: American and Israeli. E.g. the White House vs. the Knesset or baseball vs a soccer field and so on. So the book is even more educational for those parents who care to explain it to their kids what they see there. And if they don’t the children may even remember the images on their own later. Seems like nowadays every children book has to have an activity at the end and this book also complies with this newish trend. You or your child can search for a few small objects or animals on the pages of the book. The whole book is not just entertaining - while the illustrations are vivid - but also the educational bits do not feel forced. Your youngling will surely enjoy the book and so will you." (Gabor Por, Jewish Book World)

What listeners say about Does Your Dog Speak Hebrew?