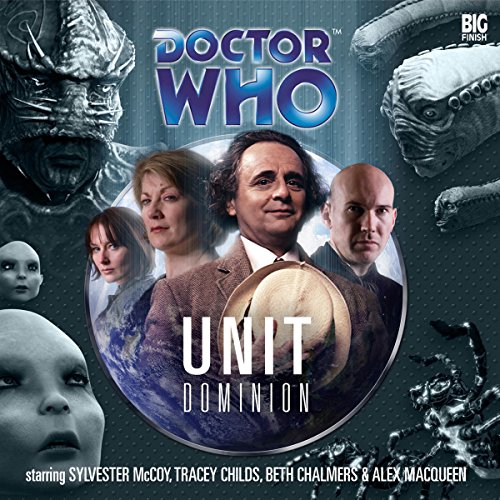 The universe stands on the brink of a dimensional crisis - and the Doctor and Raine are pulled into the very epicentre of it. Meanwhile, on Earth, UNIT scientific advisor Dr Elizabeth Klein and an incarnation of the Doctor she's never encountered before are tested to the limit by a series of bizarre, alien invasions.

At the heart of it all is a terrible secret, almost as old as the Time Lords themselves. Reality is beginning to unravel and two Doctors, Klein, Raine and all of UNIT must use all their strength and guile to prevent the whole of creation being torn apart.

What listeners say about Doctor Who - UNIT Dominion

Well, this one threw in everything except the kitchen sink! Rifts between dimensions are allowing weird creatures into our world...and so we get giant spiders, nasty insects, energy vampires, and flying heads...head that look like babies. Yeah, flying baby heads! UNIT's scientific advisor, Elizabeth Klein, tries to deal with the situation, as well as the appearance of not one, but apparently TWO incarnations of the Doctor! A lot going on, but it's fun stuff!

Well written and acted...great production values...tremendous value for money...will be listening to this again soon!

An excellent audio book by Big finish productions. Would recommend for Doctor Who and sci fi fans.

I loved the story and characters. Alex McQueen is excellent. I became engrossed very quickly.

The only note of caution I would give is to listen carefully as the plot is complex. That said I really enjoyed it and am going to listen to it again!

Who can you trust?

Where does Doctor Who - UNIT Dominion rank among all the audiobooks you’ve listened to so far?

Probably the most out ther, but also one of the best.

What was one of the most memorable moments of Doctor Who - UNIT Dominion?

Alex MacQueen is fantastic. There is something of a Colin Baker interpretation going on, but he steals the show.

Sylvester McCoy slips straight back into the part seamlessly. Underrated during his tenure this is a Doctor with nuance and deapth.

While not the height of Big Finish, this is certainly an enjoyable series, with fun mysteries and a memorable cast of characters. Alex McQueen is always a win!

A unit story, featuring the Doctor

Feels a little slow to get going, with few appearances from the Doctor. This is a UNIT story that features the Doctor, not the other way around. A gripping story that unravels slowly, so take your time and pay attention.

Worth it as it was on offer

The performance of McCoy was great and brought back fond memories. I’ve been fortunate enough to briefly meet Macqueen in person and he seemed a great guy and is definitely a great actor; his performance in this is, as usual, excellent. I will be looking for more audible productions with him in. However, I think the overall story is over complicated and the use of having people talk on radios to one another doesn’t help the sound quality at times. I felt at times they forgot the point was to produce an radio/audible production as with the background noises and radio business it wasn’t always clear. All in all I don’t consider this to be well written or produced and is just about ok. In short: great performances from the two main characters, good performances from the rest of the cast and average writing and production. Worth getting if on offer as I did...

An excellent audio book by Big finish productions. Onwards to the next Doctor Who adventure

if you like Dr who you will love this .Really good to have a unit one

Great performance from sylvester mccoy as usual. very engaging and adicitve to listen to. thanks