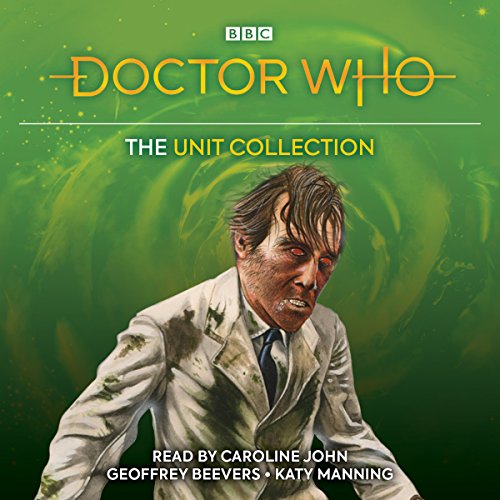 Doctor Who: The UNIT Collection

Doctor Who: The UNIT Collection

In Doctor Who and the Auton Invasion by Terrance Dicks, the newly regenerated Doctor grapples with murderous waxwork replicas and shop window dummies.

In Doctor Who and the Cave Monsters by Malcolm Hulke, subterranean reptile men wake to find their planet overrun by humans.

In Doctor Who: Inferno, a drilling project to penetrate the Earth's crust has potentially catastrophic consequences.

Doctor Who and the Terror of the Autons finds the Master in league with the Nestenes whilst in Doctor Who: The Three Doctors a crisis for the Time Lords requires the intervention of not one but three incarnations of our hero.

Read by Caroline John, Geoffrey Beevers and Katy Manning, these stories feature the Third Doctor, with a guest appearance by the First and Second Doctors.

Re: A fine collection

Per it's dscription, this series of Unit tales covers the wide range of 3rd Doctor stories starting with the 1970 opening and closing with the 10th anniversary special. The narrators are solid and easy to follow.

Sadly lacking the artwork available in other sets

This is a great collection - but why none of the individual covers and booklet content that appear with, for example, the Master Collection? The write-ups about the development of the original Target novels, and Chapter headings in a very long set, were useful to have - yet are sadly lacking here.

So excellent value, but nothing really approaching an Index.

Great stories, although not a fan of one of the narrators. Still amazing value for money and a good listen.