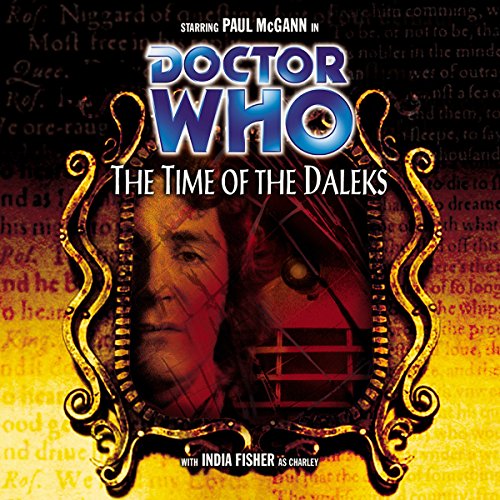 Doctor Who - The Time of the Daleks

The Doctor has always admired the work of William Shakespeare. So he is a little surprised that Charley doesn't hold the galaxy's greatest playwright in the same esteem. In fact she's never heard of him. Which the Doctor thinks is quite improbable.

General Mariah Learman, ruling Britain after the Eurowars, is one of Shakespeare's greatest admirers and is convinced her time machine will enable her to see the plays' original performances. Which the Doctor believes is extremely unlikely.

The Daleks just want to help. They want Learman to get her time machine working. They want Charley to appreciate the first ever performance of Julius Caesar. They believe that Shakespeare is the greatest playwright ever to have existed and venerate his memory. Which the Doctor knows is utterly impossible.

What listeners say about Doctor Who - The Time of the Daleks

I thought it would be better.

Daleks quoting Shakespeare sounds entertaining in theory, but in practice the story wasn't enjoyable at all. The full cast audio is what spared it a 1 star review.

A story based around a very interesting and quirky idea that is actually pretty dark. The Daleks are pretty cool in this one and the cats performs really well. I like how the emperor Dalek makes am appearance and the Daleks themselves are pretty creepy in this one.

There were a few moments that I felt things slow down and I wish it moved a tad faster.
However all things considered I really enjoyed this one.

Have really enjoyed following the 8th Doctor and Charley. Another madcap scheme by the Daleks to assassinate Shakespeare.
Great fun.