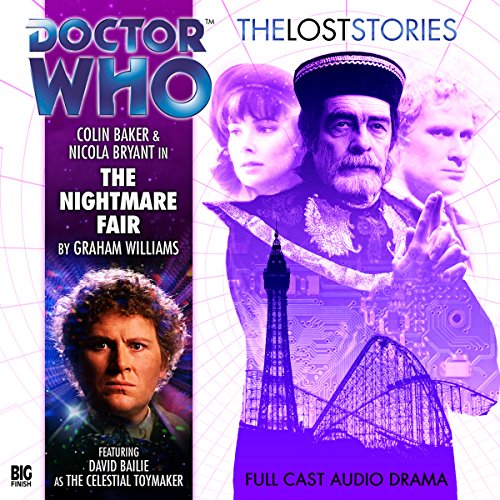 Doctor Who - The Lost Stories - The Nightmare Fair

The Lost Stories: adventures that were originally written for the Doctor Who television series but never made. Now available to hear for the first time...

The Tardis has been drawn to Blackpool in the year 1985, where the Doctor intends to investigate a dangerous space/time vortex...while enjoying some local attractions along the way. But an old enemy is watching from his base deep within the amusement park, a timeless being who craves revenge.

The Celestial Toymaker has returned. The game is on. And, should he lose, the Doctor will pay the ultimate forfeit....

Nothing to see here

An actual story suitably adapted for audio.
Although there are references in the commentary to an actual script, the play comes across as something in the ideas stage - "Let's have the Toy Maker from an old William Hartnell story return to confront Colin Baker's Doctor and Peri in Blackpool" - and that's it.

I did buy the complete set of missing stories from a cancelled season of 1980s Doctor Who, of which this is the first. I'm kind of regretting it now...
I'll give them a chance, but it may be the end for my Big Finish buying. There's too much good stuff out there for Big Finish to be complacent any more.

If I recall correctly, in the early days of Big Finish, they stubbornly declared their plays were not "talking books" and so refused to feature a narrator. (They have since featured narrators in their Companion Chronicle plays, to good effect.)
The alternative to having a narrator is to have the scene described in the dialogue. This can work when the play is conceived of as an audio play in the first place, though in science fiction this expository dialogue often comes across as contrived and intrusive, especially during the action scenes.
The climax of this play is a lot of noises and people shouting at each other. The Doctor wins the day somehow - I've no idea how. It's like watching TV with sound but no picture.
Afterwards I did a search for other people's reviews of this story because I was worried I was the only one who didn't have a clue what was going on. One reviewer had listened to it several times and still had no idea.

If you could play editor, what scene or scenes would you have cut from Doctor Who - The Lost Stories - The Nightmare Fair?

If anything, I'd be adding scenes.
As it stands, we've got people running around a fair, other people locked in a cell, the Doctor up to something (no idea what) and some guns going off.

The only reason I am not asking for my credit back is because I like to keep my collections complete.