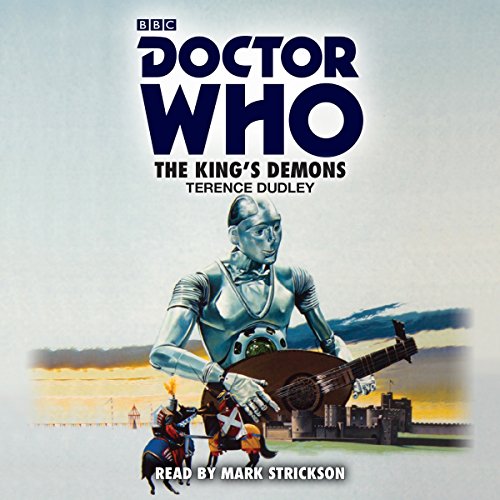 Doctor Who: The King's Demons

An unabridged reading of an exciting novelisation based on a TV adventure featuring the Fifth Doctor, as played by Peter Davison.

It is 4 March 1215, and the TARDIS materialises in England during a jousting match held in the presence of King John. It soon becomes apparent to the Doctor that something is very wrong.

Why does John express no fear or surprise at the time travellers' sudden appearance and indeed welcome them as the King's Demons? And what is the true identity of Sir Gilles, the King's Champion? Very soon the Doctor finds himself involved in a fiendish plan to alter the course of world history by one of his oldest and deadliest enemies.

What listeners say about Doctor Who: The King's Demons

As Great as the Classic Television Episode

Where does Doctor Who: The King's Demons rank among all the audiobooks you’ve listened to so far?

The audiobook is as great as the paperback and classic television episode.

What other book might you compare Doctor Who: The King's Demons to and why?

True Classic WHOVIANS will enjoy this audiobook with one of the 5th Doctor’s adventures.

The Doctors companion’s had issues with the culture and limits to their roles within the timeline of that period in England, but they adapted and overcame as well as a Doctors companion does.

This audiobook was entertaining from start to finish. Great depiction of medieval England.

The narrator, ‘Mark Strickson’, did a great job with the reading and fluctuation to the different characters within the text.