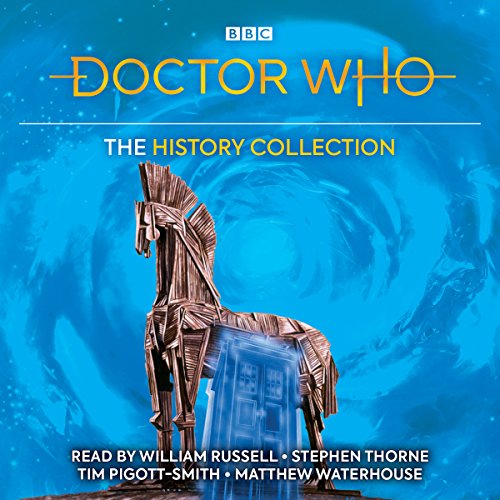 Doctor Who: The History Collection

In Doctor Who: The Aztecs, the First Doctor, Ian, Barbara and Susan materialise in Mexico during the bloodthirsty Aztec civilisation.

In Doctor Who and the Crusaders the First Doctor and his friends are embroiled in the 12th-century conflict between Richard the Lionheart and the Sultan Saladin.

In Doctor Who: The Myth Makers, the First Doctor, Steven and Vicki arrive on the plains of Ursa Minor, in the middle of the Greek and Trojan battlefields.

In Doctor Who and the Masque of Mandragora, the Fourth Doctor and Sarah fight swords, sorcery and an alien influence in 15th-century Italy.

In Doctor Who and the Visitation, the Fifth Doctor, Adric, Tegan and Nyssa materialise in 17th-century London and find themselves playing a key role in gruesome historical events....

Read by William Russell, Stephen Thorne, Tim Pigott-Smith and Matthew Waterhouse. Each purchase is accompanied by a PDF booklet featuring full cast and credits, chapter-by-chapter navigation, and sleeve notes for each book by David J. Howe.

Doctor Who and the Crusaders
Files 16-25

Doctor Who and the Masque of Mandragora
Files 54-65

Doctor Who and the Visitation
Files 66-76

"This range of classic Target audiobooks continues to go from strength to strength...." (Doctor Who Magazine)

What listeners say about Doctor Who: The History Collection

I can understand the overall theme of Dr Who through history and it should work however, it was spoilt for me by some poor characterisations and some very annoying sound effect especially in The Aztecs.

Doctor Who: The History Collection Review

I loved this audio book very much and I want more like these in the future soon.
By Orkneyislands

A mixed bag - worth a listen for The Myth Makers

Containing 4 Target novelisations: The Crusaders, The Myth Makers, The Masque of Mandragora and The Visitation this is something of a mixed bag, with the adaptations of different levels of interest and the readings similarly varied. The high point for me was the highly eccentric telling of The Myth Makers, read with aplomb by Stephen Thorne.

Superbly nostalgic for those of us who remember the days of classic Dr Who...exceedingly well read!