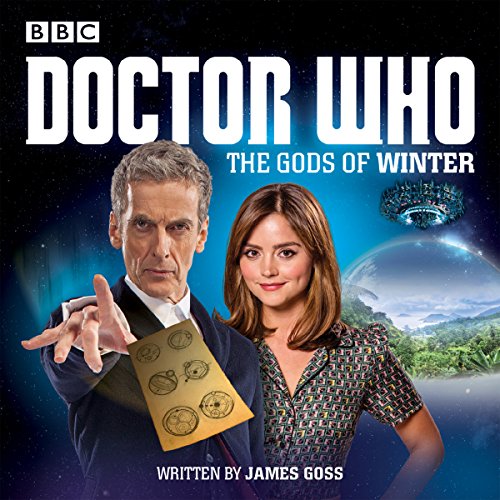 Doctor Who: The Gods of Winter

Clare Higgins reads this exciting original adventure featuring the 12th Doctor and Clara, as played by Peter Capaldi and Jenna Coleman in the BBC TV series.

On a remote human colony planet, under the cover of a protective dome, young Diana Winter summons the TARDIS.

Brought to her side by the power of a mysterious calling card, the Doctor and Clara are given one of their unlikeliest assignments yet. Yet it is one that will have far-reaching consequences.... Many years later, on the homeworld of the alien Golhearn, the time travellers once again meet Diana - but this time the stakes are much higher.

The Golhearn’s savage madness is threatening to destroy their own civilisation, and Diana has a personal reason to call for the Doctor once again.

Is he willing to assist, or must Clara go it alone? Can anyone discover the cause of the monstrous insanity that threatens them all?

Clare Higgins, who played Ohila in the Doctor Who mini-episode "Night of the Doctor", reads this thrilling original adventure by James Goss, part of the Tales of Winter quartet of stories.

What listeners say about Doctor Who: The Gods of Winter

I enjoyed the story and narration. Who doesn't need an emergency card for missing cats?

A lovely mystery with many interesting character insights

James Goss continues to delight with this Twelfth Doctor story. A well-woven tale with many mysteries layered upon one another. Looking forward to the next installment.

Nice to get these characters together again

What did you love best about Doctor Who: The Gods of Winter?

Since it's been two years since we got to have the Doctor and Clara together, it was nice to hear them having a story together again (though I know this came out a while ago). It satisfied that particular itch and I'm glad it came from a writer like Goss, who I've enjoyed before. Plus, grumpy-12 is pretty much the best 12 and we get more of that in this story. Clara got to have moments of being the quick-witted and on-the-ball companion that I've always loved about her character and have missed having in the show.

What other book might you compare Doctor Who: The Gods of Winter to and why?

I've really enjoyed James Goss's work with Doctor Who novels, since he just nails the tone and voice really well. The Blood Cell is a great entry from him that mixes things up a little bit with how it tells the story.

Hearing anyone attempt to talk like 12 brings me joy, but she was a solid performer and narrator.

It's a nice nugget of a story and just satisfying to listen to. Satisfied the itch I've had for some 12 'n Clara adventures.

it isnt the Doctor reading but it is a good story

Narrator did a good job, especially voicing the Doctor, but I have been spoiled by the David Tennant books. Story is good as well

Throw away title, throw away book.

Depends on the friend. I find any situation where the title of the book is miss matched completely to the content to be garbage throw away fiction, but the ending was cute so if someone was a big enough fan I could see them reading it.

What could James Goss have done to make this a more enjoyable book for you?

Make it a short story. There was not enough too it to be as long as it was. I had a hard time caring about anything the characters were doing because they were so flat. I liked the ending so there was a good idea buried underneath it all, but it is not enough to warrant a novel, even one as short as this.

Which character – as performed by Clare Higgins – was your favorite?

The Doctor. She did quite a good job portraying the 12th doctor's surly Scottish tones.

Did Doctor Who: The Gods of Winter inspire you to do anything?

Yes to criticize the garbage title of the book. It has almost zero topicality or bearing on the story. Truly Lame.

Again, Meaningless throw away title indicative of garbage fiction. Not worth the time or money. Clare Higgins was great I hope to hear her on better stories.

I liked it. A fun little story overall. Very descriptive! I loved the line " a fluffy ball of razors" to describe carrying the cat! The narrator did a good job with the voices especially the grouchy, sarcastic tones of the Doctor. I did NOT like the background sound effects. I found them very distracting. it would of been so much more enjoyable without the back ground noise!

Whovians will love this

Yes to all my fellow Whovians.

What other book might you compare Doctor Who: The Gods of Winter to and why?

The Doctor Who: Sins of Winter. In this one the Doctor seems so cold in this story.

Towards the end when the Doctor offers the last Winter a trip in the Tardis. She asks selfishly to go back to her first worst day of her life.

Yes I worked out on the elliptical listening to this story.

really enjoyed this one

this was a really well rounded book. gold pacing tension and well developed characters. a little short, but in doing so manages to never be boring.

loved it very disruptive on what was happening