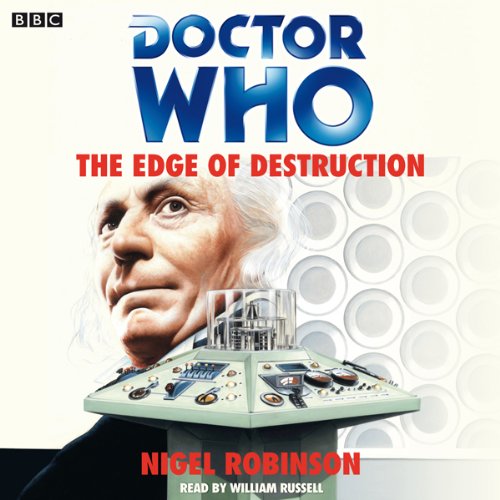 Doctor Who: The Edge of Destruction

William Russell reads this exciting novelisation of a classic Doctor Who adventure.

In a final bid to regain control of the TARDIS's faulty control system, the Doctor is driven to experiment with a dangerous untried combination.

With a violent explosion, the TARDIS blacks out and the crew find themselves trapped inside. A simple technical fault? Sabotage? Or something even more sinister? Tension mounts as the Doctor and his companions begin to suspect one another.

What has happened to the TARDIS? Slowly a terrifying suspicion dawns. Has the TARDIS become the prisoner of some powerful fifth intelligence that is even now haunting the time-machine's dark and gloomy corridors? William Russell, who played the Doctor's companion Ian in the original TV serial, reads Nigel Robinson's complete and unabridged novelisation, first published by Target Books in 1988.

What listeners say about Doctor Who: The Edge of Destruction

At the edge of my seat!!

I was captivated by the narrative and the upbeat performance in the background whenever something was about to happen.
even though I've watched the episode, I found myself trying to figure out what was going on, it has a bit of sherlock mystery to it. And in the end I must confess that I got impatient of William Russell when they were about to reach the conclusion.

I'm 50 and a life-long (Londoner living in PA, but that is irrelevant), Who fan....I have to admit that I've never liked the first doctor. I went out on a limb and tried this book. It had good reviews. BTW, For the 50th anniversary, there is a new sequence of books available. I purchased the first few books and The third doctor story was good and inspired me to buy another Audiobook. This one. Unfortunately, for 90% of this story, these preconceptions were confirmed. The first two hours is like being trapped in a room full of illogical people arguing.( I understand that this is the plot). Because they are beloved characters, it was quite upsetting. I was waiting for the plot to resolve for far too long..Very frustrating. Without wishing to spoil the plot, the ending was a bit silly and not worth the mental effort for arriving there.
Worse than reversing the polarity. I almost asked for a refund, but for the chance to share this personal review.
This is just my perspective and I felt cheated by this story.. . If other Dr Who fans enjoy this, then I admire you. You must find good in everything.
Just my tuppence worth.

The soundtrack is overloud and drowns out the dialogue at points. Also there are are awkward silences between chapters.

As for the story, the weaknesses are nicely summarized by the Wikipedia article. I might add that the narration is a little overwrought at points, particularly for the female characters.

The ending, well, let's just say this is one of the primary reasons this is for completists only. Overall, the story is weak. However, there are a few moments which help create the overall mythos we know and love.

A thoroughly enjoyable listen that expands beautifully the original TV episodes. William Russell's reading is always well paced and his portrayal of the Doctor evokes images of the erasable original.

Felt I was part of the story very emotional Felt sorry when it finished will try to find more story like this if you are a Doctor. Who fan you will love this story