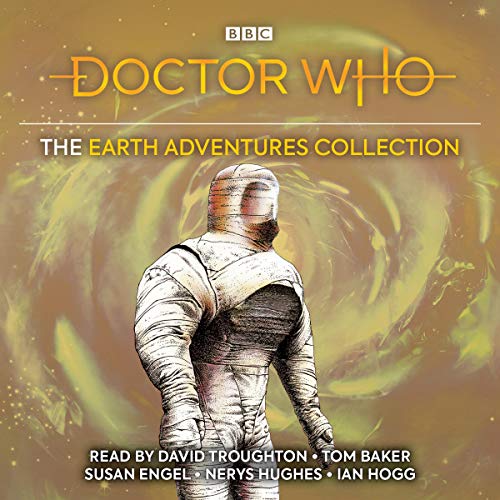 Doctor Who: The Earth Adventures Collection

Doctor Who: The Earth Adventures Collection

In his first-ever Doctor Who novel, Tom Baker’s incredible imagination is given free rein. A story so epic it was originally intended for the big screen, Scratchman is a gripping, white-knuckle thriller almost 40 years in the making. The Doctor, Harry and Sarah Jane Smith arrive at a remote Scottish island when their holiday is cut short by the appearance of strange creatures - hideous scarecrows who are preying on the local population. The islanders are living in fear, and the Doctor vows to save them all.

In his first-ever Doctor Who novel, Tom Baker’s incredible imagination is given free rein. A story so epic it was originally intended for the big screen, Scratchman is a gripping, white-knuckle thriller almost 40 years in the making. The Doctor, Harry and Sarah Jane Smith arrive at a remote Scottish island when their holiday is cut short by the appearance of strange creatures - hideous scarecrows who are preying on the local population. The islanders are living in fear, and the Doctor vows to save them all. 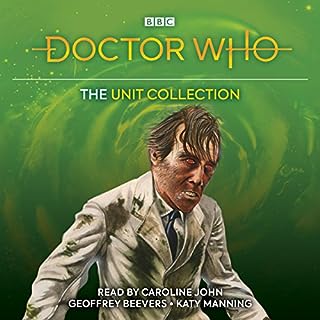 Five classic novelisations of TV adventures featuring the United Nations Intelligence Taskforce, led by Brigadier Lethbridge-Stewart. In Doctor Who and the Auton Invasion by Terrance Dicks, the newly regenerated Doctor grapples with murderous waxwork replicas and shop window dummies. In Doctor Who and the Cave Monsters by Malcolm Hulke, subterranean reptile men wake to find their planet overrun by humans. In Doctor Who: Inferno, a drilling project to penetrate the Earth's crust has potentially catastrophic consequences. 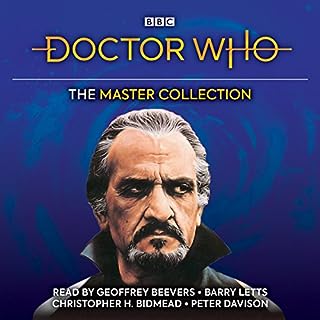 Five classic novelisations of TV adventures featuring the Doctor's arch enemy, the Master! In Doctor Who and the Doomsday Weapon by Malcolm Hulke, the Master has stolen the Time Lord's files on a weapon which could make him ruler of the Galaxy. In Doctor Who and the Daemons by Barry Letts, secret ceremonies have been designed to conjure up a horribly powerful being from another planet. 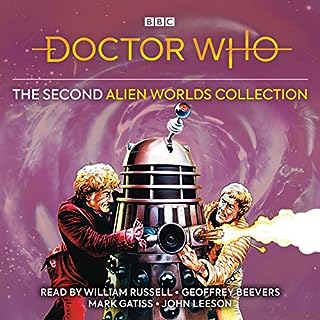 Five classic novelisations of exciting TV adventures set on distant planets! In The Sensorites, the First Doctor is forced into an uneasy alliance with a race of telepathic creatures from the Sense-Sphere. In Doctor Who and the Space War, the Third Doctor finds that a full-scale war between Earth and the planet Draconia seems inevitable. In Doctor Who and the Planet of the Daleks, the Third Doctor and Jo discover a vast army of Daleks waiting to mobilise and conquer on the planet Spiridon. 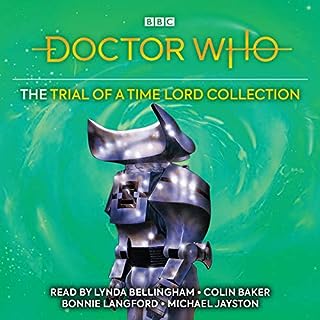 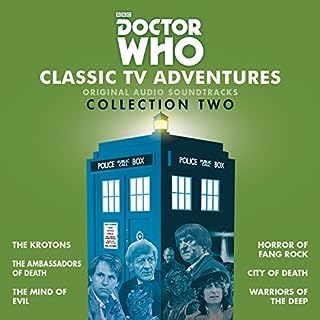 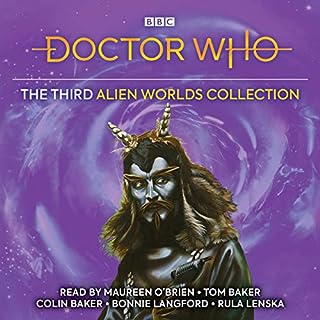 In 'The Rescue', the First Doctor meets the sole survivors of a crashed spaceliner on Dido. In 'Doctor Who and the Creature from the Pit', the ruthless Lady Adrasta is keeping an unusual visitor prisoner on the planet Chloris. In 'The Twin Dilemma', a newly regenerated Doctor tries to become a hermit on the planet Titan 3. In 'Paradise Towers', the Doctor and Mel meet the residents of a dystopian hell, and in 'The Happiness Patrol' the TARDIS lands in trouble on the colony world Terra Alpha. 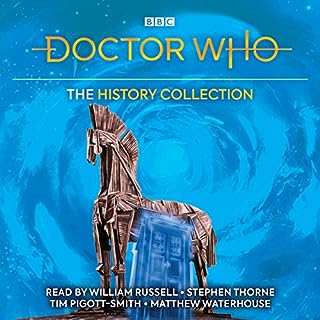 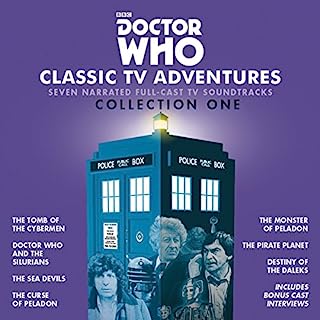 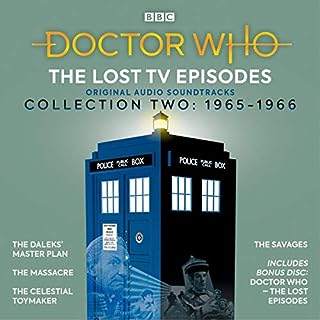 Four more thrilling soundtrack adventures from the early days of Doctor Who, featuring serials lost from the TV archive. The pictures may be lost, but each of these stories survives as a soundtrack recording. Remastered, and with additional linking narration, they can be enjoyed once more. In The Daleks' Master Plan, the Daleks have stolen the Time Destructor, and are threatening to destroy the fabric of time itself. In The Massacre, the TARDIS materialises in Paris, 1572. Also including The Celestial Toymaker and The Savages. 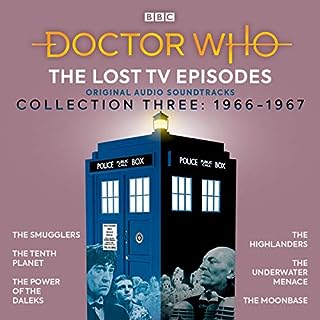 Six narrated TV soundtrack adventures starring William Hartnell and Patrick Troughton as the First and Second Doctors - plus bonus features. Absent from the TV archives, these stories survive in their entirety only as soundtrack recordings. Now remastered, with additional linking narration, you can enjoy them again: plus bonus interviews with Anneke Wills, and the BBC Radio 3 programme Dance of the Daleks. 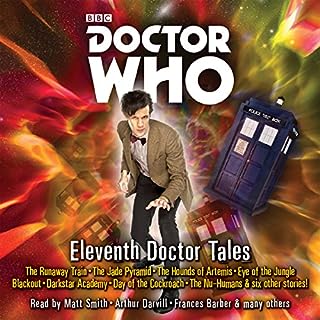 Join the Eleventh Doctor on journeys in time and space in the stories 'The Runaway Train' by Oli Smith, 'The Ring of Steel' by Stephen Cole, 'The Jade Pyramid' by Martin Day, 'The Hounds of Artemis' by James Goss, 'The Gemini Contagion' by Jason Arnopp, 'Eye of the Jungle' by Darren Jones, 'Blackout' by Oli Smith, 'The Art of Death' by James Goss, 'Darkstar Academy' by Mark Morris, 'Day of the Cockroach' by Steve Lyons and many more. 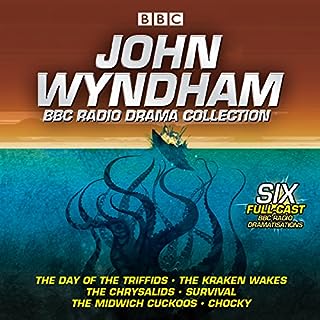 Bill Nighy, Barbara Shelley and Peter Sallis are among the cast in six classic BBC Radio dramatisations of stories by one of Britain's most popular science fiction authors. 'The Day of the Triffids', first broadcast in 1968, is set in a world in which most people have been left blind after a meteor shower, and lethal carnivorous triffids are roaming the land. 'The Kraken Wakes', dramatised for radio in 1998, is a gripping story of monsters from the deep, alien invasion and ecological disaster.

In Fury from the Deep, the Second Doctor, Jamie and Victoria discover sentient seaweed threatening a gas refinery on the South Coast of England. In Doctor Who and the Pyramids of Mars, the Fourth Doctor and Sarah arrive in 1920s England, where plans are being laid to free Sutekh the Destroyer from his prison on Mars. In The Stones of Blood, the Fourth Doctor, Romana and K9 confront an ancient villainess on Bodcombe Moor. In The Awakening, the Fifth Doctor, Tegan and Turlough become enmeshed in sinister events in the village of Little Hodcombe. In Ghost Light, the Seventh Doctor and Ace visit Perivale in the 1880s and find a terrible secret lurking at Gabriel Chase....

Each purchase is accompanied by a PDF booklet featuring full cast and credits, chapter-by-chapter navigation, and sleeve notes for each book by David J. Howe.

"...this always excellent range continues to delight in its pursuit of committing the entire Target Books library to audio." (Doctor Who Magazine)

What listeners say about Doctor Who: The Earth Adventures Collection

5 wonderful full length novelizations of class Doctor Who episodes. Timeless tales of science fiction adventures. My favorite, "The Pyramids of Mars" read by the one and only $th Doctor, Tom Baker. Highly recommended for long evenings aboard the TARDIS.

Too bad you didn’t use another episode of Sylvester McCoy and Sophie Alfred. Ghost Light is awful. Silver Nemesis would have been much more entertaining

A buffet of Doctor Who tales.

A classic collection of tales through time and relative dimensions in space with the early Doctor Who's and his companions. Guaranteed to provide at least one tale to satisfy your Doctor Who cravings, if you like the classics.

The Good, The Average and The Oh Dear!

First 3 books I really enjoyed. Fury being one of my all-time favourites along with Pyramids. Stones being for me the best of the Key to Time saga. David Troughton, Tom Baker were of course excellent narrators and Susan Engel did a fantastic job with Stones, very easy to listen to. From there on the quality of the stories begin to decline. Nerys Hughes however does Sterling work in trying to bring to life the written version of a fairly average Davison era story which I found hard to stay with. Ghost Light I really struggled with. To be honest I had just about given up on Who by the time of McCoys final season and l think I watched about 10 minutes of Part 1 of GL. The audio story for me was complete and unadulterated trash with a very anti - Christian, left-wing, liberal agenda that was constantly promoted throughout.( I may have been a bit more forgiving if the overall story had been even average.) But I endured to the end. Ian Hogg I found difficult to listen to but that said, any narrator would have struggled with that one. The bizarre thing is is that was written by Marc Platt who also penned Spare Parts for Big Finish which is my favourite BF production. Anyway there you go.

Great stories but some narration a little off

Loved the stories, The stones of Blood has always been one of my favourites, unfortunately you couldn't really tell it was the fifth doctor. Again with Ghost Light, only this time it was Ace, which although you definitely knew it was her she had a highly annoying deep voice making her sound male. I couldn't fault the narration for the other stories, but Tom Baker is always spot on, and David Troughton is always good, especially when playing his father. Definitely Worth listening to, I'm certainly glad I did and will be returning to it in the future.