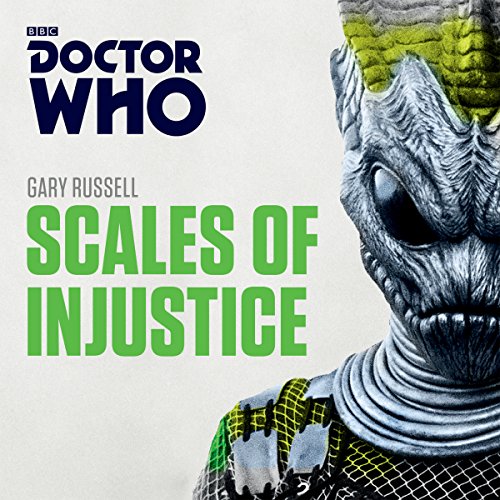 Doctor Who: Scales of Injustice

An unabridged reading of this original novel featuring the Third Doctor, as played on TV by Jon Pertwee.

When a boy goes missing and a policewoman starts drawing cave paintings, the Doctor suspects the Silurians are back. With the Brigadier distracted by questions about UNIT funding and problems at home, the Doctor swears his assistant, Liz Shaw, to secrecy and investigates alone. But Liz has enquiries of her own, teaming up with a journalist to track down people who don't exist. What is the mysterious Glasshouse, and why is it so secret?

As the Silurians wake from their ancient slumber, the Doctor, Liz and the Brigadier are caught up in a conspiracy to exploit UNIT's achievements - a conspiracy that reaches deep into the heart of the British government.

What listeners say about Doctor Who: Scales of Injustice

Great performance. Really captured Doctor #3.
Not my favourite story... should've ended with "To Be Continued..."

Dan Starkey is a talented freak. His Brigadier and Third Doctor are absolutely AMAZING. It's as if the actors themselves are speaking. The only downside is his feminine voices which, quite honestly, I wasn't expecting much anyway. His female Dutch journalist is laughable, sounding more like a male bookie from Brooklyn. That all set aside, I can't say enough about this audio. An amazing story with beautiful insight to the Brigadier and his family life, including a small Kate Stewart. Perfect.

Tries to be too clever (but isn't)

Initially this seemed like a good story. It has a great premise. However I gave up on it about halfway through as it became quite irritating. It's more about "look at how much I know about Dr Who" as they try to cram as many canon facts as possible.

It's a pity the author didn't do some research on the military as his assertion that Lethbridge-Stewart was a Sapper and then a Lance Corporal along with Mike Yates being promoted from Sergeant to Captain is quite ridiculous!

Narration by Dan Starky is excellent as per his other reads such as 'Amorality Tale'.

This fourth doctor and Liz Shaw era story is brought to life by Starkey's brilliant characterization that makes the piece feel more like a radio play than an audio book.
Gary Russell has fun filling in the blanks between season 7 and 8.

I used to very much enjoy reading the Dr Who novelisations when I was young. Mr Dicks did an excellent job with them and your imagination stepped in to create the characters and scenes. This novelisation has taken Mr Dicks approach to new level! The stories are more modern in the sense that issues discussed these days are discussed. The characters are more rounded. We hear about the Brigadier's family life and Ms Shaw is more considered as a scientist in her own right and not just a foil for the Doctor. The story is more ... human ... It is really well written and the narration is excellent. The story and narration provoke your imagination to create the scenes. Really wonderful.