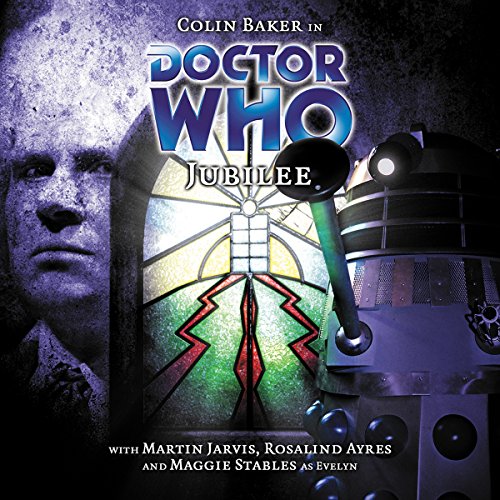 The story that became Dalek on TV. Although the televised episode in 2005 (starring Christopher Eccleston) ended up being very different in many important ways, this is the core of the idea that Russell T Davies wanted writer Rob Shearman to develop. Find out how it all started....

Hurrah! The deadly Daleks are back! Yes, those loveable tinpot tyrants have another plan to invade our world. Maybe this time because they want to drill to the Earth's core. Or maybe because they just feel like it. And when those pesky pepperpots are in town, there is one thing you can be sure of. There will be nonstop, high-octane mayhem in store. And plenty of exterminations!

But never fear. The Doctor is on hand to sort them out. Defender of the Earth, saviour of us all. With his beautiful assistant, Evelyn Smythe, by his side, he will fight once again to uphold the beliefs of the English Empire. All hail the glorious English Empire! Now, that sounds like a jubilee worth celebrating, does it not?

What listeners say about Doctor Who - Jubilee

worth a credit but not the greatest Doctor Who

starts off well, story isn't the greatest doctor who with some inconsistencies in the story. A bit too much dalek conversation at times as they are only really good at saying one word. but all in all I enjoyed it as the performance ones are better than the plain read stories in my opinion. worth a credit for sure

Keeps you hooked from start to finish
Starts a bit slow the emotions are vintage Dr who could see it in my mind like watching a film. Very well done.