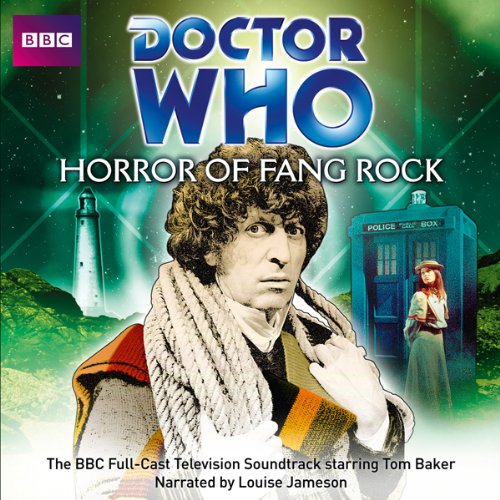 Doctor Who: Horror of Fang Rock

Fang Rock Lighthouse stands somewhere off the South Coast of England in the early 1900s. Its three keepers have lately noticed a strange fog, and one has seen an eerie light in the water. Soon one of them is dead, and Old Reuben believes that legend is about to become reality.

When the Doctor and Leela arrive, they become involved in a frightening fight for survival. A shipwreck brings four others in search of shelter, but nobody's safety can be guaranteed on Fang Rock that night. With the lighthouse under attack, one by one the humans are picked off. The Doctor needs all of his initiative and ingenuity if he and Leela are to survive.

Tom Baker stars as the Fourth Doctor in this thrilling full-cast TV soundtrack adventure from 1977, with linking narration by Louise Jameson. In a special bonus interview, she recalls her time as Leela in the BBC TV series.

What listeners say about Doctor Who: Horror of Fang Rock

Some of my forgotten favourites found on Audlble

Would you consider the audio edition of Doctor Who: Horror of Fang Rock to be better than the print version?

I read a lot of Doctor Who book and find differences when I read or watch an episode but I love all versions of Doctor Who that whichever one I'm currently doing is my favourite.
It is like looking at gem stones. The gem may look different from various sides or light. But it is always a gem.
I've been a fan of Doctor who since we got our first tv when I was eight or so. Discovering new ways to travel with the Doctor is always a treat. So is going back and revisiting his earlier incarnations.
I missed the first few Doctors and only got into the series when the guy who installed the tv put it on Doctor Who with Tom Baker as the Doctor. So he was my favourite. And I love Leena as his companion. Reading this was better than watching it on our "New" tv with its black and white screen and constant stream of interference that I watched it on in the 70s.
I love Doctor Who and I loved this trip down memory lane.

Tom Baker 's Doctor was my favourite Doctor Who but it was leena who gave this story it's strength.

What about Louise Jameson (linking narration) and Tom Baker ’s performance did you like?

The fact that the actress who played Leena is the one doing the narration makes this Audible book so wonderful.

"Danger at Fang Rock"pretty much covers it.

All fans of Doctor Who and especially the fans of Tom Baker will love this book. Leena is a bonus.

Overall a very good story, holds your interest. Loved it as much as I did the original TV version. Ms. Jameson does an excellent narration, but she was Leela , so it's not surprising! And anything with Tom Baker is awesome.

Nostalgic - straight back to Saturday teatimes

Would you listen to Doctor Who: Horror of Fang Rock again? Why?

The soundtrack is sometimes better than the television. For example - the memory of the Rutan climbing the life house can only be improved with added imagination and several decades distance.

Which character – as performed by Louise Jameson (linking narration) and Tom Baker – was your favourite?

Who can better Tom Baker in his pomp as Dr Who?

The iconic theme tune still invokes shivers of anticipation and excitement whenever its heard.

As a young boy when this aired on tv, i was gripped by this adventure, and till this day remains a firm favorite