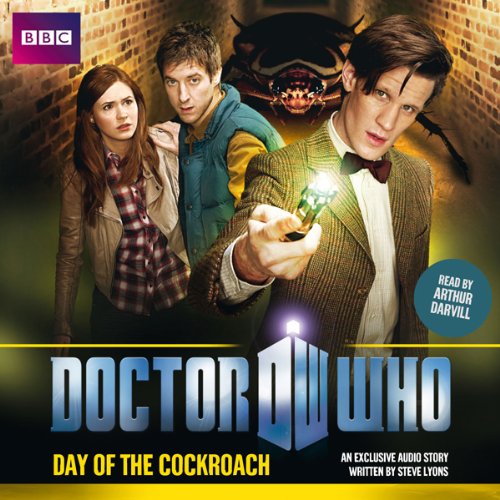 Doctor Who: Day of the Cockroach

The TARDIS materialises in a pitch-dark tunnel, where the Doctor, Amy, and Rory stumble on the dead body of a soldier. Questioned by his superior officer, Colonel Bowe, they learn that they're inside a British nuclear bunker, in the middle of an atomic war - in 1982. Amy and Rory weren't even born then, but they know the bomb didn't drop that year, and so does the Doctor. The friends also know they had nothing to do with the death of Sergeant Trott - so who, or what, was the killer? And why does the Doctor's psychic paper not work on the Colonel?

The Doctor, Amy, and Rory soon learn that something else is lurking in the shadows. Something deadly....

Written specially for audio by Steve Lyons, Day of the Cockroach features the Doctor, Amy, and Rory as played by Matt Smith, Karen Gillan, and Arthur Darvill in the hit series from BBC Television.

What listeners say about Doctor Who: Day of the Cockroach

Would you listen to Doctor Who: Day of the Cockroach again? Why?

I have to admit that I am still not the biggest fan of Matt Smith, but this episode is great! I could not stop listening and the story was very well told by Arthur Darvill. I will not let any hints out about the story and I highly recommend it if you are a Dr. Who fan like myself. I will enjoying listening to this again in the future. Enjoy!

Rory Williams can read to me all day long

It's good to know that I can still get new Who with the Ponds via audiobook. It's an added bonus when Arthur Darvill, a la Rory Williams, reads the adventure. He knows the characters so well; he can really make them come alive.

It is a bit short, but Arthur gets the characters voices well. I just like his voice, and his fairly decent impressions of Karen's Scottish accent. He understands them well, I think. Story was a bit short, and I really dislike the background sound effects. Really creepy, and kind of distracting.

I was really impressed with a solid adventure that could have been an episode. what was astounding was the voice acting of Arthur darvill. he set the whole story and set it to sore to new hieghts. I will be listening again to hear him pain this amazing story and colorful characters.

the story was difficult to get through. At times it felt very slow and predictable.

An An Average Doctor Who Story

Yes, this book has all the frills at Who story should have. Rory, cut off from Amy and the Doctor, creepy cockroaches, a little mind control, and nothing being as it seems.

Which character – as performed by Arthur Darvill – was your favorite?

Arthur Darvill, of course performs Rory (his TV character) the best. But he does a pretty mean Matt Smith impression. Amy Pond is the only character that needed a little work.

Yes, and I did. It made working on the lawn and garden, more enjoyable.

What did you love best about Doctor Who: Day of the Cockroach?

This story was written just on the line between creep you out so you turn it off and I have to hear the rest.

Arthur Darvill is Rory, so he has the characters bang on.