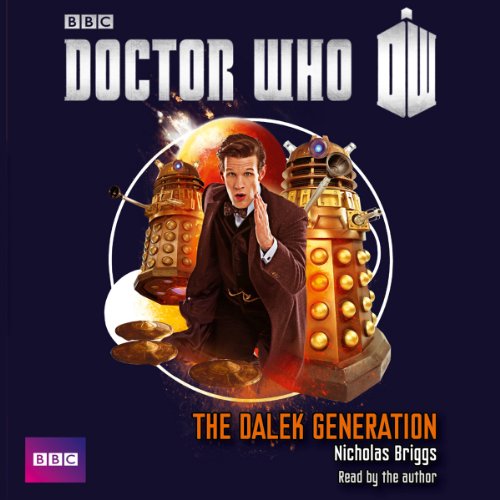 "The Sunlight Worlds Offer You A Life of Comfort and Plenty. Apply now at the Dalek Foundation."

Sunlight 349 is one of countless Dalek Foundation worlds, planets created to house billions suffering from economic hardship. The Doctor arrives at Sunlight 349, suspicious of any world where the Daleks are apparently a force for good - and determined to find out the truth. The Doctor knows they have a far more sinister plan - but how can he convince those who have lived under the benevolence of the Daleks for a generation? But convince them he must, and soon. For on another Foundation planet, archaeologists have unearthed the most dangerous technology in the universe... A thrilling, all-new adventure featuring the Doctor as played by Matt Smith in the spectacular hit series from BBC Television.

What listeners say about Doctor Who - Dalek Generation

The best story yet from Briggs--a great premise!

Normally I'm not worried about what will happen to the Doctor and his companions in a book, but this one has a completely different dynamic and there are some truly harrowing moments of suspense. It also made me tear up several times because I really cared about the characters' tribulations. What I can't understand is--why doesn't Briggs (the voice of the Daleks, Cybermen, etc on tv) write an episode for the television show? From this book, I'd say he is at least as good a writer as Mark Gatiss, who has written several episodes. And surely there is no one more dedicated to Doctor Who!

Excellent book! The Author put a lot of creativity, twists and turns like the TARDIS in the Vortex. The Best Parts & Conclusion were absolutely...well you're going to just have to have a listen, won't you?! Except...trust me...be sure to listen from the first words all the way through until final words to get the complete story! But No Spoilers Here. Nicholas Briggs, Thank you very, very much!

A fun story, nice twists, interesting story without a companion, not sure where the Ponds are at this timeline

SO WELL PLANNED OUT!

Get. this. book. NOW!!!!!!!
Seriously it's quite possibly the best book ever!
i don't want to spoil it but its so good!
GET IT NOW THE DALEKS WILL EXTERMINATE YOU!

Yet another great Doctor Who audio book. A fun adventure and charmingly read. Kudos to the author.

Not my favorite Smith era book but a neat one.

Have you listened to any of Nicholas Briggs’s other performances before? How does this one compare?

I think the one thing a narrator of a Doctor Who novel has to do is do a decent impression of the doctor in the story. It's not the best Matt Smith I've heard but it works. And yes the Dalek voices are done with the FX.

There's a bit of social commentary hidden in the story. The doctor tries to convince a world of people that the Daleks are evil but they are too easily distracted by reality TV. He tries to hijack the TV broadcast but people are mostly just annoyed.

I almost stopped when I realized the doctor's companions in this story were 3 young children but the premise is interesting enough to keep going. Not the doctor vs dalek showdown one would hope for and no huge triumph at the end but a neat twit.

The Doctor and children!

What did you love best about Doctor Who - Dalek Generation?

I liked the Doctor interacting with children for most of the novel.

I enjoyed this story, though near the end I found it a little haunting. I know that can be good sometimes, but I was really affected by several scenes. I recommend this audiobook. Only thing that is a negative is that Nicholas Briggs doesn't do a very good 11th Doctor. His 9th Doctor is much better.

Better reasoning for the Daleks keeping humans alive, and more plausible systems of control for the Dalek empire & PR spin would have helped.

What was most disappointing about Nicholas Briggs’s story?

My disappointments are balanced between the lack of rational for keeping humans alive (without spoilers, I just need to say that the Sunlight Worlds are needless for the long-term goal the achieved and a convoluted way of reaching it, even by dalek standards) and just how little effort was made to get the dystopia to work.

The narration was really rich, but Nicholas Briggs's quality as a narrator was in inverse relation to his writing.

If you could play editor, what scene or scenes would you have cut from Doctor Who - Dalek Generation?

I would have cut out a lot of what I took for social commentary and attempts to show how naive and brainwashed people are to provide better looks at how the Daleks keep the a grip on their Foundation.

The alien race introduced here is rather well-done, and the scenes with the reporter were nicely chilling. I just wish that this Dalek's-pretending-to-be-Nice scenario made more sense.

Set between the Doctor's time with Amy and Clara

This is the first Doctor Who novel that I've listened to (through Audible), rather than having read it myself, and as of the day of this review (6th May 2013), Nicholas Briggs' story is far superior to any of the current onscreen season's offerings (so far...), and in my mind would make an absolutely fantastic 2 part story.

The plot, on the whole, feels like a classic series Doctor Who Dalek story, peppered nicely with the racy pace, and emotional depth (yes, I even shed a tear...) of the current generation of Doctor Who, it's twists and turns leaving you guessing to the end - FANTASTIC!

Nicholas Briggs narrates his story superbly, relaying a real sense depth to the main players (this can especially be said of his narrated portrayal of the Doctor himself), and as you would expect his Daleks (via his voice box) sound as effectively menacing as his Dalek do in the current TV show.

I personally liked the use of the minimal ambient music that is played occasionally, and felt it was an effective tool to highlight the contrasting atmospheres presented throughout the story without distracting you from Briggs' heart felt narration.

I would recommend this audio book to fans of Doctor Who (classic and new alike), where Briggs' familiarity of the TV show that he's worked on really shines through in his story and his narration of it.

Any Whovian would love this story.

My favourite character, was, of course, the Doctor!!

Which character – as performed by Nicholas Briggs – was your favourite?

I am really REALLY impressed at what a good inpersonation Nick does of Matt Smith! We are so used to him as the voice of the Daleks, I was pleasantly surprised at how good he is at being Matt!