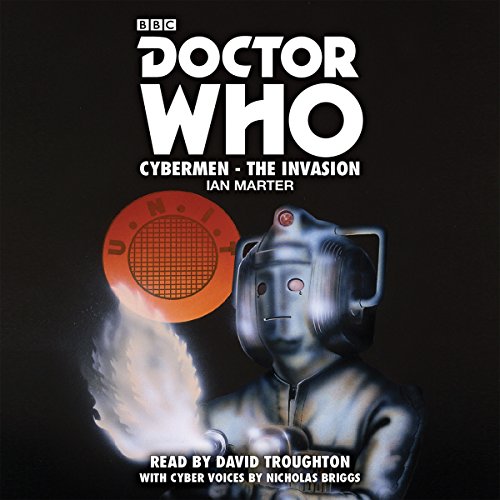 Doctor Who: Cybermen - the Invasion

Doctor Who: Cybermen - the Invasion

An unabridged reading of an exciting classic novelisation, based on a TV adventure featuring the Second Doctor, as played by Patrick Troughton. Materialising in Outer Space, the TARDIS is attacked by a missile fired from the dark side of the moon. Back on Earth, the newly-formed United Nations Intelligence Taskforce (UNIT), led by Brigadier Lethbridge-Stewart, is disturbed by a series of UFO sightings over Southern England. Meanwhile, a large consigment of mysterious crates is delivered to the headquarters of International Electromatix, the largest computer and electronics firm in the world. These three seemingly unconnected events are in fact the preparations for a massive Cyberman invasion of Earth, with one aim: the total annihilation of the human race. Duration: 5 hours approx.

What listeners say about Doctor Who: Cybermen - the Invasion

Just far too many '-ily' words

Great voice acting and production but I just could not get past the poor prose.
he said, menacingly. she looked Icily. he said darkly, rightly, sinisterly, innocently and so on.
The worst for me was 'she glanced at the photos admiringly.' Why couldn't it have been simply (oh no, now I'm doing it) 'She admired the photographs.'
yes, the novel is unabridged but it grates so....so...jarringly?
PS over use of Avderbs is a personal pet peeve and this is just ridiculous!

Has Doctor Who: Cybermen - the Invasion put you off other books in this genre?

Anything by Ian Marter.

The voice acting was superlative.

Maybe I'm being a fool, he said solemnly. But I just wish i could refund this!

What an amazing adaptation

This sent shivers down my spine hearing Pats son speaking his dad's lines. This a perfect adaptation of Ian Marter's story a thoroughly recommendable audible release

David Troughton's narration is great - his voice very reminicent of his much missed father. Marter's gritty interpretation of the story is fabulous. I recommend.

Well read by David Troughtin. Looking fir help to repair some TARDIS circuits, The Doctor finds a conspiracy fronted by a multinational electronics firm. Kidnap, espionage, murder and mayhem with a final pitched battle against the invaders. A welcome return of UNIT led by The Brigadier (first appeared fighting the Yeti ) as military firepower.

This audio version is fantastic, Troughtin Jnr is a great reader. 10/10