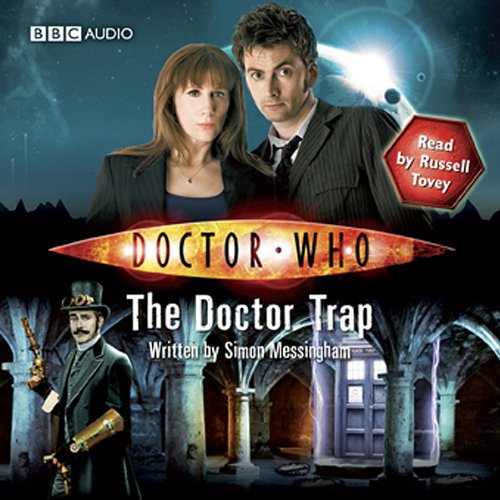 An abridged reading of a BBC Books novel featuring the Doctor and Donna (as played by David Tennant and Catherine Tate in the hit BBC One TV series).

Sebastiene was human... once. He might look like a nineteenth-century nobleman, but in truth he is a ruthless hunter. He likes nothing more than luring difficult opposition to a planet, then hunting them down for sport. And now he's caught them all - from Zargregs to Moogs, and even the odd Eternal. In fact, Sebastiene is after only one more prize. For this trophy, he knows he is going to need help.

He's brought together the finest hunters in the universe to play the most dangerous game for the deadliest quarry of them all. They are hunting for the last of the Time Lords - the Doctor!

The plot was confusing, unsatisfying, and weird. For the entire first half Donna just wandered alone, which I don't think made her very happy and certainly left me frustrated with the writer who made such a dynamic Leading Lady flounder for that time.

The only reason to listen is the narrator's fabulous rendition of the main villain's voice: I kept listening for that reason, checking out from the plot to just chuckle at that bit.

To be fair now! Maybe if I listen a few more times I would understand it, but I have little interest in trying.

This is the first Who novel I've disliked. It moved at such a rapid pace half the time I didn't know what was going on. It felt like the book was incomplete and all the moments meant to catch the reader up had been eliminated. Most of the characters were narrated with very annoying voices and character wise Donna was given nothing to do except make clever little quips and be in distress and need rescuing.

I initially thought going in that the novel would be a spin on "The Most Dangerous Game" and at first it feels as though that's the direction its heading in, but very quickly the plot is redirected into more a traditional which Doctor is the real one and who is fooling who, which has been done before in the show.

Occasionaly there was a moment that made me smirk were the dialogue combined with the narration just nailed David Tennant's Doctor, but overall this is forgettable. It feels rushed and incomplete.