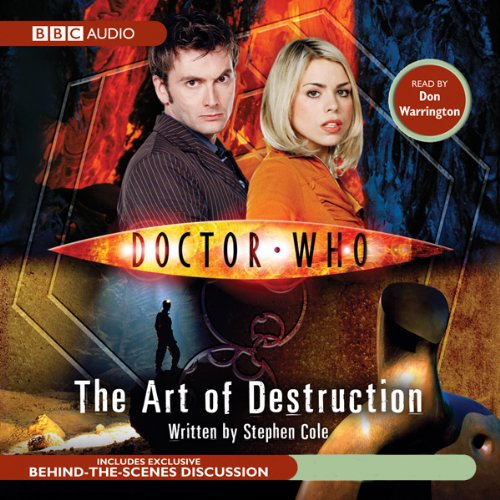 The TARDIS lands in 22nd century Africa in the shadow of a dormant volcano. Agri-teams are growing new foodstuffs in the baking soil to help feed the world's starving millions ¿ but the Doctor and Rose detect an alien signal somewhere close by.

When a nightmare force starts surging along the dark volcanic tunnels, the Doctor realises an ancient trap has been sprung. But who was it meant for? And what is the secret of the eerie statues that stand at the heart of the volcano?

Dragged into a centuries-old conflict, Rose and the Doctor are soon elevating survival to an art form ¿ as ancient, alien hands practice arts of destruction all around them.

Featured are the Doctor and Rose as played by David Tennant and Billie Piper in the hit series from BBC Television.

I Love Doctor Who. I especially love the Doctor and Rose together but this audiobook was so hard to listen to. It was entirely due to the reader. He lacked entirely the enthusiasm the Doctor always has in his voice. He would have been more suited for something depressing.

Everything a 10th Doctor fan is looking for

Have you listened to any of Don Warrington’s other performances before? How does this one compare?

I've never listened to his other performances, but he did an excellent job portraying the Doctor's and Rose's mannerisms. I always prefer David Tennant's narration for the 10th Doctor, of course, but Don Warrington is probably my new second favorite.

Excellent mystery, a variety of aliens, Rose and the Doctor with their playful banter and dedication to each other -- pretty much everything a 10th Doctor fan wants. ;) Stephen Cole perfectly captures the Doctor - his way of speaking and thinking - and Don Warrington brings him to life. Highly recommend this one :)

I always love doctor who books but this one was better than most. thank you Stephen Cole and Don Warrington.

Not a good narrator

Would you try another book written by Stephen Cole or narrated by Don Warrington?

I like the works of Stephen Cole in general, but I would not willingly listen to another work narrated by Don Warrington.

Would you recommend Doctor Who to your friends? Why or why not?

I love the Doctor Who stories, they are fun, exciting and usually a great listen. This one story might be good, but it should be redone by another narrator. Tennant would be great!

The voice of the narrator is screeching, annoying, and lacking the characteristic life of the Doctor and Rose. It's just annoying to listen to, and I would rather read the book than listen to this.

If you could play editor, what scene or scenes would you have cut from Doctor Who?

I couldn't really pay much attention to the story, as I just wanted it to finish.

Judging by the other works of Stephen Cole, this is probably a good story on the whole, but it doesn't shine through the poor narrating. Not all the actors of Doctor Who are great narrators, and it's unfortunate that this wasn't picked up before the whole story was narrated and the cd produced.