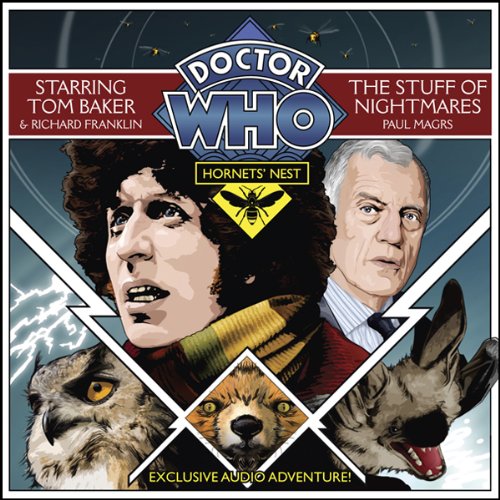 Tom Baker reprises the role of the Fourth Doctor in the first of five thrilling, brand-new audio adventures, with Richard Franklin as Mike Yates.

Responding to an advert apparently worded for him alone, Captain Mike Yates (retired) is reunited with a ghost from the past. But why has the Doctor, that mysterious traveller in Time and Space, sent for his former UNIT acquaintance? Trapped by a horde of vicious creatures in an apparently innocuous English country cottage, the two old friends are on the brink of an enormous adventure.

As the Doctor relates his recent escapades, it becomes clear to Mike that they - and the Earth at large - are facing an enemy of unimaginable power and horrific intent. The nightmare is only just beginning....

With Susan Jameson as Mrs Wibbsey and Daniel Hill as Percy Noggins.

Tom Baker's [Fourth] Doctor was a master of quick, quirky quips and turn-on-a-dime reaction. With a booming voice, instantly recognizable scarf, and a series of memorable facial expressions: he still is /the/ Doctor for many fans of the long running series. While all the other living Doctors from the original series have showed up in third party materials, especially the Big Finish radio productions, Baker has tended to stay aloof from the role, excepting bits here or there, since he departed in 1981. Getting any bit of Whoniverse with Tom Baker in it is a delight: Hornet's Nest was absolutely a must buy.

It IS charming and interesting. Baker's voice is magnificent. Franklin, returning as once-Captain Yates, is spot on. The foley effects and soundtrack are all top notch. The story, too, is appropriately weird and spooky and ends only after hooking you in for more (parts 2-5 of Hornet's Nest). It is just not quite Doctor Who.

The presentation has a lot to do with this. It is not an audiobook, nor is it exactly full cast. Somewhere in between. Most of the 72 minutes is taken up by either the Doctor or Yates retelling what happened to them, with a second voice or so added in during key dialogues. While I will never criticize Baker's speaking voice, it does break the weird, sporadic quirk that was a staple of his version of the Doctor. Only in one or two short spots does the cadence we are used to seep out.

The Tardis is mostly mentioned, not used (short time jumps, apparently, took place). The rest of it surrounds 7th-9th season [Third Doctor] like storyline of him being in one place for some time. It even has an [ex-]UNIT member.

Still, I chuckled at the explanation of why the Fourth Doctor got captured so often (the best way to see inside the secret fortress) and I'll have to hear more: give it time to bring out the Tardis and more "Who"-esque stories. Just, fans, be aware that it is Baker, but not quite as you remember.

Don't listen to the bad reviews, its a great book

OK, so first of all this is a great audio book and as a big doctor who fan (I have watched every episode, including the classic series and the new series) I definitely recommend buying it.Don't listen to the people that say it's not like doctor who because the whole idea of tom baker living in a cottage was tom bakers idea to get back in to doctor who because he had not wanted to have anything to do with doctor who and this was his way to ease back into the series. And tom baker has said that he really liked the script. So while other reviewers may have different opinion, I really liked it and I hope if you buy it you enjoy it as much as I did.

Not a Dr Who story

What was most disappointing about Paul Magrs’s story?

It really wasn't a Dr. Who story. The writing style did not change with the character viewpoints, and the Dr Who references felt like they were inserted into the story after the fact.

The voice acting, especially Baker's, was excellent. I would have preferred more of a "audio play" than this; that would have showcased their talents better.

hold on to your seats!

Would you consider the audio edition of Doctor Who to be better than the print version?

I rely solely on audio. I am blind.

The sound effects, the narrators, and the plot line itself was brilliant! The quality of the audio was also wonderful. I cannot wait to get the final installment of this story!

Even though Tom Baker has a definitive English accent, he is still easily understandable. He also places the inflection on the right places, and his depiction of the doctor's flipancy is great!

This book made me hold my breath, and I kept wanting more and more. I did not want it to end!

Yes. Audible, PLEASE continue to provide unabridged audiobooks in the Doctor Who series!

This is no Big Finish Production

The writing is mediocre and pretty 2-dimensional. The story is one that could have been well served by several more re-writes and a proper go with a sound editor. Maybe I'm just spoiled by the audios by Big Finish Productions. This story (all 5 parts of it) just doesn't have what it takes to truly satisfy.

Tom Baker is back as the Doctor.

Where does Doctor Who rank among all the audiobooks you’ve listened to so far?

I love Doctor Who. Whether it's tv or book or audiobook, I will enjoy it all.

I love this story because, it has the fourth Doctor in it. Tom baker was the first Doctor I ever watched. After all these years he is still my favorite.

Tom Baker was great. So we're all the other voice actors in it.

When I heard Tom Bakers voice fo the first time, took me back to my childhood. I wanted to cry for joy.

I liked the Hornets nest series very much. I have no plans to review the other parts, because I will just repeat what I've said in this review. I hope Tom Baker keeps playing the Doctor even its only on audio. I loved his cameo on the Day of the Doctor, and it just makes me want him to do more.

As far as I'm concerned Tom Baker is the ONLY "Dr. Who" - whether it is video or audio.
The story seemed interesting and was delivered well as are the other Baker/Who stories I have.
My chief complaint is the fact that the full 6 hour story would wind up costing either 6 credits or over $38 - whereas some other excellent stories I have, some over 25 hours long, were obtained for ONE credit or less than $20.

Tom Baker is wasted on such a mediocre story

Tom Baker, the fourth doctor, who is an excellent reader, deserves some great writing! Something of the calibur of what the current tv series provides to us. As thrilled as we all are to hear Tom Baker, back and reading once again as The Doctor, the material that Mr. Baker has been provided with to read to us is beyond retarded. Please god, some good author, write something and send it to Mr. Baker to consider reading. Unfortunately, we don't have Douglas Adams anymore. How about Neil Gaiman?

Also the whole scum bag money sucking approach by Audible regarding this series is shameful. (They release the story an hour at a time and have the gall to charge for each hour).

I loved Tom Baker in Dr Who- now he's back!! Great cast and I loved Percy Noggins!!

Baker is Sublime as the doctor, you'll love it

Baker is phenominal, A fantastic command of the english language, an exciting delivery Tom has a supreme confidence, one of the greatest voices of the last century, totally imersing.

Baker could make an inflight Safety Manual sound exciting to a pilot.

It leaves me rather irritated to think that Tom Baker hasn't been churning these audio books out by the dozen.

If you think that Jonathan Ross costs 13 million a year and he can't even pronounce his R's, baker must be into 9 figures.

No sign of ring rust here Baker is the Doctor, the Doctor is Baker, he didn't go away he, owns this, in fact everything he reads.

Tom Baker would give Christoper Lee, Peneoply Keith, or Steven Fry a run for thier money any day of the week.

This story is excellent! It captures the flavour of the original stories perfectly! Tom Baker is as incredible as ever and supported by a brilliant cast. The episodic release is perfect too - I've purchased the first two episodes and am eagerly awaiting the next instalment with all the anticipation of the original series! Can't wait for the next bit!