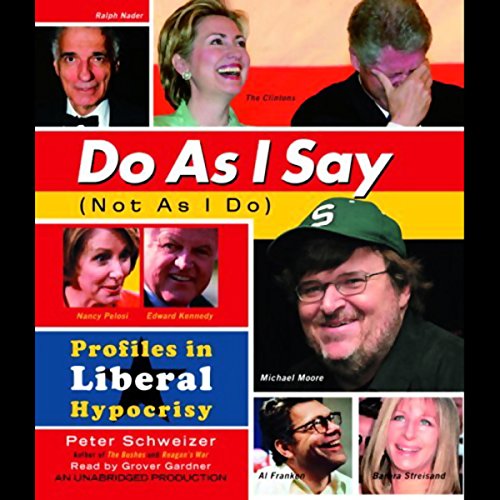 Members of the liberal/left exude an air of moral certitude. They pride themselves on being committed and selfless and seem particularly confident of the purity of their motives and the evil nature of their opponents. To correct economic and social injustice, liberals support a whole litany of policies and principles: progressive taxes, affirmative action, greater regulation of corporations, raising the inheritance tax, strict environmental regulations, children's rights, consumer rights, and more.

But do they actually live by these beliefs? Peter Schweizer decided to investigate in depth the private lives of prominent liberals. What he found was a long list of contradictions.

Schweizer's conclusion is simple: liberalism in the end forces its adherents to become hypocrites. They adopt one pose in public, but when it comes to what matters most in their own lives, they jettison their liberal principles and adopt conservative ones. Schweizer's book thus exposes the contradiction at the core of liberalism: If these ideas don't work for the very individuals who promote them, how can they work for the country?

"An entertaining exposure of the hypocrisy among some prominent liberals....Schweizer reveals that the most vocal liberals do not practice what they preach." (The Weekly Standard)

This is an amazing read! I was stunned at the exact nature of how this data is put forward. The author lays it out in a plain way, and there you have it...I was stunned on how good this was!

confirmed what I suspected about the left wing hypocritical Democrats. they must he defeated

If you could sum up Do as I Say (Not As I Do) in three words, what would they be?

Totally amazing! The hypocricy seems to never end...from both sides! It's just disgusting, & all types seem to be great at it! Worth the listen but be prepared to be constantly shaking your head from side to side!

This books is a must read if you want to know the truth about what many high profile people say versus what they do. For example, one might not know that the environmentally correct Kennedys own oil companies, and put them in tax sheltered trusts, avoiding the taxes they say we don't pay enough of. Michael Moore, Barbara Streisand, a long list of big names and how they don't do what they tell us to do. The information is very good, and shows the hypocrisy of those who would presume to be morally superior.

This is a very enlightening book. It's very telling in regards to how politics can be such a game and how either side can really be controlled by the people with the most money and power rather than what is right and what is wrong. It also shows you how negative things that are often applicable to one party can be twisted by people in their attempts to apply them to another, which tells me that they are aware of their own guilt because they are so busy trying to direct it elsewhere rather than taking responsibility. I never liked Barbara Streisand, and I now have more reason not to like her and many other Hollywood stars who use their power and money to influence politicians and people rather than letting them decide for themselves what is right and what is wrong. And I suppose it says something about the politicians and people who are persuaded to vote one way or another based on the opinions of any famous person rather than their own study of the facts.

I throughly enjoyed this audio book.It made my 25 mile trip to work something I looked forward to for several days.I plan to listen to it again and again.

Great information! Sad we don't have people in the media making such observations.

It is about time

This is a great read. Peter Schweizer does a excellent job in exposing the leftist elite hypocrisy with multiple facts and details. It is about time someone has exposed the truth behind the facade. It would make a great Christmas gift to your conservative and especially liberal friends and family members.

I enjoyed all of the information and would recommend this book to anybody with an open mind to be honest. American Democrats are an interesting breed.