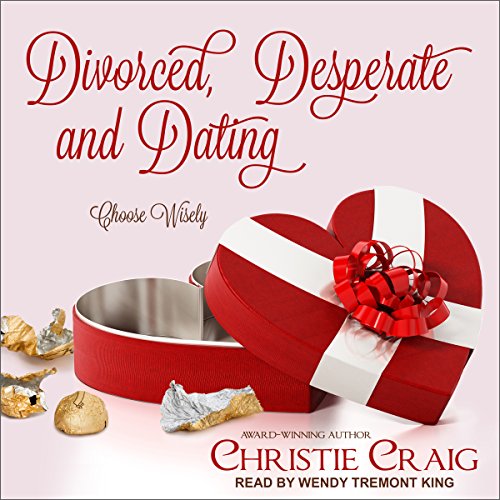 Sue Finley murdered people...on paper. As a mystery writer, she knew all the angles, who did what and why. The only thing she couldn't explain was...well, men. Dating was like diving into a box of chocolates: sometimes the sweetest-looking specimens were candy-coated poison. After a breakup with a bank robber and a divorce from a cross-dresser, she gave it up for good. Then came Detective Jason Dodd.

Raised in foster homes, Jason swore never to need anyone as much as the parents who'd abandoned him. That was why he failed to follow up after experiencing the best kiss of his life: real passion was addictive. But when Sue Finley started getting death threats, all bets were off. The blonde spitfire was everything he'd ever wanted - and she needed him. And though this novel situation had a quirky cast of characters and an unquestionable bad guy, he was going to make sure it had a happy ending.

What listeners say about Divorced, Desperate, and Dating

The narration, although not as bad as the first gal from the first book, still was pretty bad. Wendy King sounded bored and unsure during most of the chapters of the book, but was still manageable to listen to.

The story itself was fun and sexy, with bouts of suspense. Overall, it was a good listen.