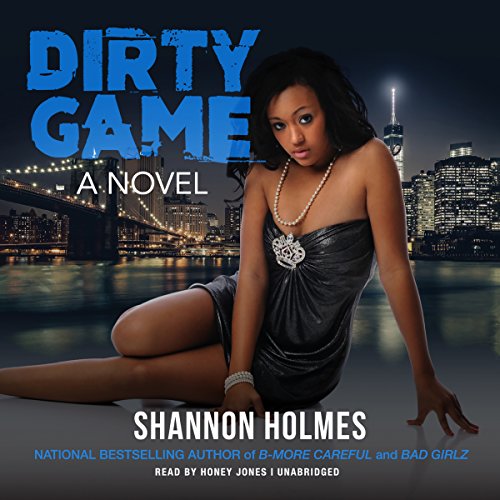 Shannon Holmes, king of urban lit and number-one Essence best-selling author, brings you another story from the mean streets of the South Bronx.

Kenny "Ken-Ken" Greene left his days as a hustler behind him when his wife was killed during a scam gone bad, leaving him with a baby daughter. Now he's a cab driver, doing what he can to put food on the table and give his daughter, Destiny, everything she needs. In spite of his past, or because of it, he's willing to do whatever it takes to keep Destiny off the streets. But when he is shot and paralyzed during a robbery while on the job, Destiny knows that she has to step up to the plate to take care of the father who has provided for her.

Allowing herself to learn from one of the fiercest street hustlers, Destiny becomes his lover, and soon her skills rival his. But the longer she stays in the game, the deeper into the game she falls.

What listeners say about Dirty Game

The Game Is Indeed Dirty!!!!

Wow. The ups and downs of everyday life! With friends like these who needs enemies. It never ceases to amaze me how someone came dislike you and plot against you simply because they wanna be you! This is a really good read! As usual Honey Jones did an amazing job bringing this story to life

A complete waste of time and money. I don't care about the sequel. Save your credit.

First off I absolutely love Honey Jones. The book was good also looking forward to sequel

This book wasn’t very good in my opinion. It could have been better; the storyline was ok.

Why did Ken Ken have to die and no one ever got his shooters. However Rome was a dirty dog and so was Makeba. Friends like those, Destinee was better off

Don't waste your time not worth it at all. The story line was nonsense. The performance was not that great get it on kindle somewhere cheaper

it was a slow start however, turned out pretty good. i wanted a better ending