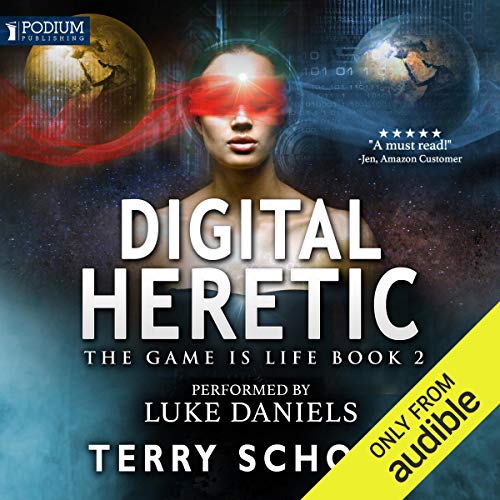 Millions on Earth are shaken by the events set in motion by Zack's final play. Billions on Tygon watch breathlessly as the consequences of his actions ripple through both worlds. Will his girlfriend, still inside the Game, step forward to lead the movement that he created?

Billions of lives are in jeopardy of being lost based on the decisions made by children inside the Game.

Went from plausible Sci-Fi to unrealistic

Not really its not my job to change things. I guess it could have been longer but its still alright.

What was one of the most memorable moments of Digital Heretic?

The moment when the book/series went from plausible sci-fi to super unlikely sci-fi. The first book had me thinking "This very well could be how the universe works" but this second book added in things that make it very unlikely. This kinda killed the series for me. I will probably listen to the other books but I am not itching to listen to the next one.

Which character – as performed by Luke Daniels – was your favorite?

All of them! Luke is such an amazing narrator. He is able to give characters a similar accent but still different enough for the listener to know what character it is.

Could you see Digital Heretic being made into a movie or a TV series? Who should the stars be?

Maybe a made for TV series but not anything special.

Luke Daniels is an amazing narrator even if the author is sloppy and rushing to finish a book.

I got through the first book, and enjoyed it some but the second book I actually regret buying. A little over halfway through I removed the download. Some parts were very interesting and others just were not and took up to much time for me. I would find myself distracted and not paying attention. Maybe it's partly because there are now gods, and greater power even in the real world. Tru is just looking like a second Jesus, it seems so unoriginal.

Downhill from the first book.

Immature writing, no new innovative ideas introduced and really harped on the religious aspect. Last hr and a half was a chore to get through.

Great Fun and Listen but please....

cease the Fantasy elements....Terry Schott! Stay in SCi FI/Mystery/Thriller . Of course, all these are already written but while I love the story, characters (a lot now), story arc and performance it is fringing on a Fantasy book just like what the other reviewer said.
Ready for more and I See that book 3 is going to be good. The 9 hours flew by

The book was great. The only issue I had was the positive light it brought on non science. Even though it was explained through as though virtual reality, it brought up pseudo science as real thing. Pseudoscience has no place in science fiction. That's fantasy.

Really disappointed in this book. The first novel caught my attention and had me listening nonstop. I was very excited to continue this unique story. However, Digital Heretic just didn't follow up. With almost zero plot or character development this book seemed like a pure money grab. The conflicts that did arise seemed forced or made up on a whim. I just can't get behind a story where everything falls in place so easily, with no attention to existing plot details. Inventing a new character with superhuman powers?? Sure why not. Switching Danielle to be a completely dependent character rather than an outgoing leader. Sure why not. Just doesn't add up.

The narration was the only thing keeping me going. Well done Luke Daniels for carrying an otherwise dismal few hours.

OMG, I couldn’t believe how many times I heard “he/she nodded”! I read the first book long ago and I loved the concept, saw that there was a continuation and heard this book. This whole book is one of the worst things I heard in this app. It is all fails: no need to list them, it has it all.

You should read all of The game is life books!

this series is amazing! The author is very good at explaining different points of world view through a very interesting storyline! we'll make you question your own reality! well done?

Love the narrator, story is ok

I love Luke Daniels and could listen to him narrate anything. This series needs some love though. The story is lacking direction and pacing, especially here in the second of the series. I only got this one because I was desperate for something to listen to and saw that Mr. Daniels was narrating. I doubt I'll get the rest of the series, even with the cliff hanger ending.

Diverting enough story and Luke Daniels is his usual engaging self (though he loses a point for his cockney 'baddie' accent). My god though, the main character in this book is Basil Exposition. Every 10 minutes of so two characters have a conversation to lay out in explicit detail the inner workings of the game system that, given that it is the foundation of their society, they will have grown up understanding. NPCs for example.

Apart from that, it is a decent telling of a well worn trope with some interesting add ons. Doesn't surprise and delight like an Iain M Banks but worth a listen.

If you've ready book 1, just buy the book and enjoy listening. You know it's going to be good, and it is. You won't be left hanging for the next book, but you will want the next book (trust me I've binge listened to them all).

This book basically picks up where book 1 left off, and continues telling the story of our young players in the VR system and goes into more depth and answers some of the questions you'll probably already have, while creating yet more for you to think about. A lot of new ideas are introduced and you'll be left thinking about them every time you step away from listening.

There is little in the way of telling you what's happening in this book without giving too many spoilers, but if you've not yet read book 1, you should as you'll be missing a lot of background information.

Can't wait to get my hands on the next part. so many twists to the story that hopefully will be uncover soon. highly recommended.