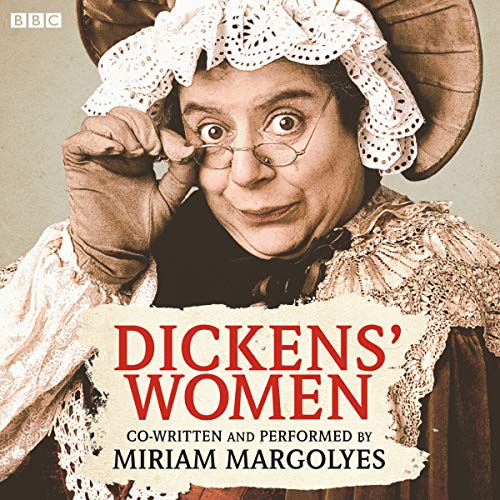 From Little Nell to Miss Havisham, Dickens’ Women tells the story of Charles Dickens’ life through his beloved characters. Cowritten and performed by Miriam Margolyes, best known for her role as Professor Sprout in the Harry Potter films, this one-women show is a celebration of her infectious passion for Dickens’ work.

Taking on 23 different Dickensian characters, many of whom were inspired by real people such as Mary Hogwarth, Dickens' sister-in-law, Margolyes showcases her astonishing versatility as a performer.

Dickens’ Women delighted audiences across the world in 2012 as Margolyes took her Olivier nominated show on tour for the bicentenary of Dickens' birth.

Miriam Margolyes at her best

Sound recording of Miriam Margoyles stage production Dickens’ Women. Miriam really brings Dickens and his female characters to life in this wonderful one woman show. I highly recommend it to fans of both Dickens and Margoyles. You won’t regret it!

I first saw Miriam M in the role of Mrs. Squeers in the traveling production of the RSC's NICHOLAS NICKLEBY directed by Trevor Nunn. This performance is equally apocalyptic.

In just under 90 minutes, Ms. Margolyes delivers an interpretation of more than 10 central and peripheral characters in Dickens' novels and short stories. In doing so she dignifies forever the role of the actor in society, revealing the ways in which the women in Dickens' life informed his characters -- and how his rendering of these characters revealed the authors' life -- including its more demonic sides.

With only a few rare exceptions, I have never felt as riveted to any recorded performance as much as this. Margolyes is a master of voice and character in her readings, so much so that she puts the garden variety book performer to shame.

In addition, her revelatory interpretations of female characters from a dozen novels and short pieces illuminate the themes and dramatic strategies of the works in a manner that has eluded the best of critics.

The readings run deeply enough to bear repeated listening. You may not love Dickens, the man, as much as you did when you started, but you will want to read more of his work sooner than later.

A triumph for a song.

Very short but a lovely jaunt into Dickens

I've never been a massive fan and f Dickens but Miriam makes his works seem very entertaining compared to the dour and miserable durge I assumed them to be.

This performance should be part of the national curriculum. Beautiful performed and explains Dickens in a very simple way, cutting through the older style English.

I had this on CD and was delighted to find it is now available on Audible. Miriam Margolyes gives an outstanding performance as various female characters from Dickens novels. Her command of language and expression is excellent. This is hugely entertaining and powerful. It gives a great flavour of his writing and attitude towards women.

While not a pure biographical approach it does let you into Dickens' sark and rather troubled psyche. Performed with understanding, a great find for fans.

Saw this wonderful one woman show in Australia in 2012 and was blown away. Having it on audible is the next best thing to owning a DVD of, which unfortunately is not available