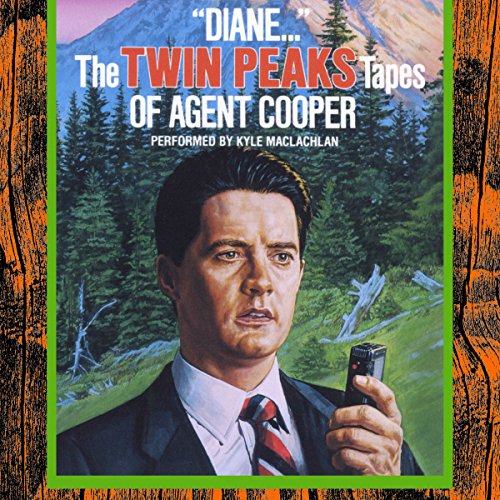 Unavailable in any other format - the original blockbuster audio tie-in to the television phenomenon Twin Peaks.

Re-experience the mystery of Twin Peaks. The Cooper Tapes. The private world of Special Agent Dale Cooper, previously reserved for one woman...Diane, including notes and stories never revealed on television. From the man in the black suit, Twin Peaks in his own words.

"...Diane, a small town is not unlike a river - lots of hidden currents and eddies, each holding its own secrets. My guess is that I haven't even broken the surface yet.... Oh, one other thing, Diane, never drink coffee that has been anywhere near a fish...."

What listeners say about "Diane...": The Twin Peaks Tapes of Agent Cooper

A good recap of the first season

This is a good, funny, bite-sized production that encapsulates the first season of Twin Peaks as experienced by Agent Cooper, and relayed to his oft-mentioned-but-never-seen assistant, Diane. Audio from the show is mixed in with new tapes recorded by Kyle MacLachlan. There's not much information here that isn't in the show, and there are no additional insights into the mystery or the characters, but if you want to listen to a fun recap of your favourite moments, and spend a little more time with a beloved character, this will satisfy.

Interesting but not crucial

As a supplement to the show, this is an interesting sidebar. McLachlan is excellent as Special Agent Cooper in what little new content there is, but what there is is not a lot. Audio clips ripped straight from the show interspersed by drips of anecdotal new content, unfortunately ending before season two and adding nothing to the prevailing story aside from a little more atmosphere. Unless you need some Cooper in your life, you can avoid.

For those who love cherry pie and coffee.

For people who haven’t seen Twin Peaks it will be a weird ride but the soothing voice of Kyle MacLachlan should help put you at ease. For those who have then this is a wonderfully nostalgic trip back to a town that lives in all of our hearts.

This audio book narrated by Kyle McLachlan gives you a deeper understanding of his character, agent Dale Cooper. Some of thr excerpts are directly from Season 1 while others preceed the series. A must read for fans

You know, this is, excuse me- a DAMN fine audiobook. I've heard I can't tell you how many audio books in my life and this, this is one of the finest.

Would you listen to "Diane…": The Twin Peaks Tapes of Agent Cooper again? Why?

Bought this the second I got in to work today. I had this on audio cassette as a kid and loved it, was so excited to see it's back in print on audible. A must for die hard Twin Peaks fans!

Perfect for the Twin Peaks Addict

I can't praise Kyle MacLachlan's performance enough. It has all the charm of the original TV series. I only wish it were longer.

I actually still have my cassette copy of this from back in the 90's and obviously run into some difficulty listening to it because cassette. So happy to have this on my phone now to listen to whenever I want!!
Such a fun recording!!

probably not for most. It would have been nice if this had been rereleased as part of the new "Secret History of Twin Peaks" which I recommend above this title.

Nothing new for people who have watched Twin Peaks

This was just a recap of everything that happened in the TV series with no new revelations.

Great for Hardcore Fans of the Series!

While this doesn't add much more to the series as a whole, this audio book is super fun! It has some new entries that Cooper leaves Diane, but mainly it's recycled audio from the series. While this is somewhat of a downside, it's always great to hear Kyle McLaughlin reprise his role, as the fantastic Agent Cooper!

If only it were much, much longer. I would’ve loved to hear Cooper’s inner monologue through the end of season two.

Wish it was longer!

Is it sad I listened to this 3 times in a row at work?

I really was hoping for more. there is very little that was not already on the show.

There are only a few &quot;tapes&quot; in this which are actually from the TV series and most are original to the audiobook, which I was pleased about as it would have felt unnecessary otherwise. Slightly disappointed that it only goes up to the end of Season 1 in the Twin Peaks timeline. Kyle Maclachlan gives a great performance.

Loved listening to Agent Cooper talking to Diane, brought back all the memories of watching the show which I might add can't wait for season 3.
If you enjoyed twin peaks then you'll enjoy sitting and listening to our one and only Agent Dale Cooper

Not a whole lot of new material, mostly just recordings made on screen. But wonderfully presented. Wish it had been longer

It was a joy to return to Twin Peaks.

Enjoying a good strong cup of coffee with Agent Cooper was a joy. I can almost smell that cherry pie!

Diane, you won’t believe this, but I’m actually looking at the Milky Way...

What an incredible companion piece to the original series of Twin Peaks. Kyle Maclachlan does an amazing job at reprising his role of Special Agent Dale Cooper and adds more to the mystery of Laura Palmer’s murder. If you’re a fan, you’ll love this. If you’re watching the series for the first time, steer clear until you’re done! With the first two seasons, at least 😉 Best enjoyed over a slice of cherry pie and a fine cup of coffee!

Watching, reading, and finally hearing all of what twin peaks has to offer is truly an experience everyone has to witness. Damn fine series.

If you're a big TP fan it's worth a few quid.

Some of these tapes appear in the show, some don't. There's nothing particularly new or revelatory here but Kyle's performance is wonderful, as you'd expect.

I simply loved this! The only complaint is that it doesn't cover season 2 too...

I listen to it every night

I usually don't like audiobooks, took a chance on this one and WOW. So immersive.

Far too short and lacking in story

As a fan of the show and loving the new series I thought I would revisit some original run material having not heard this before. Besides of couple of new Cooper moments that made me chuckle I found the rest added nothing to the show. I was expecting some further insight, added layer of depth or addition to the story....alas no. and before I knew it the end music was rolling and I had to check the chapter list thinking I must have skipped over some chapters maybe.