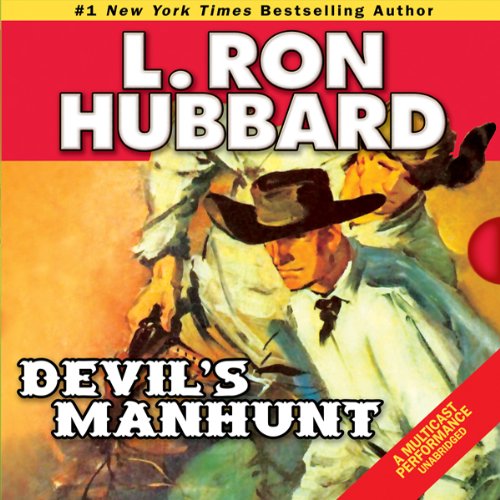 In the Arizona territory, every mountain hides a fortune - and every man fends for himself.

Tim Beckdolt, rangy and self-reliant, is as American as the frontier itself. But after spending eight treacherous months digging $175,000 in gold out of Desperation Peak - all he has left is desperation. Two sadistic strangers have taken his gold, and now they want to take his life. He's on the run - the target of a Devil’s Manhunt.

In a time and a place where the only law is the law of survival, Beckdolt will have to live by his wits...or die by the bullet.

Also includes two additional Western tales: “Johnny, the Town Tamer”, the story of a local swindler who meets his match; and “Stranger in Town”, in which a drifter confronts a corrupt sheriff...and his own dark past.

The fists are flying and the guns are blazing as the audio version of Devil’s Manhunt puts you hot on the trail of blistering Wild West action.

What listeners say about Devil's Manhunt

If you like pulp-fiction, this is a great book. Hubbard excelled at good pulp fiction stories; they flow, there's action, and the story moves at a good clip.

L.Ron needs to stick to Scifi and let the professional western writers like Louis L'Amour write westerns. These stories are pretty amateurish.