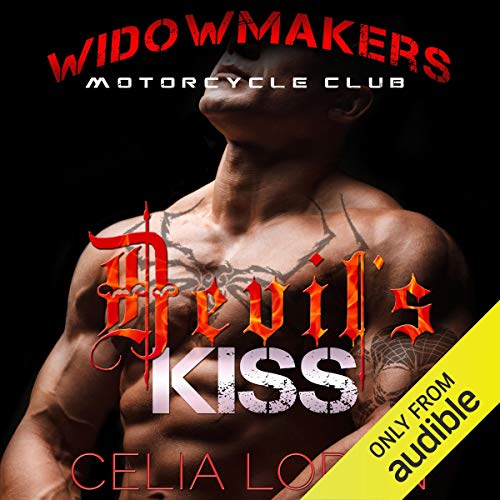 It all changed one night, with one kiss. He was nineteen. She was only sixteen. She would've been better off if she'd been kissed by the Devil himself. Olive's good girl from a broken family who always looks for love in all the wrong places. West is her brother's best friend - a super hot bad boy biker raised on the streets of Las Vegas, and totally off limits. That summer Olive moves with her mother to the East Coast for a chance at a better life, to escape the biker gangs and corruption of Vegas - but she never forgets about West. Years later, on the run from a stalker ex, Olive finds herself once again living in Vegas with her brother Stick and sleeping two doors down from West. When Stick goes on a run with the Widowmakers MC he leaves West to look after Olive-and it doesn't take long for him to find her bedroom.

This is a STANDALONE Novel - No Cliff Hanger - Content suitable for adults only, contains violence, and graphic sexual content.

What listeners say about Devil's Kiss

This story kept my interest from the beginning to the very end. I'd love to see more of her books in an audible format. Less dark than others in the MC genre, but very good.
Narrator was able to give distinct voices to each character which was terrific.

I love a forbidden romance story and this one involves two other plots I love as well! Brother's best friend and MC Romance are two of my other favorites! Couldn't put this book down. I really connected with all the characters.

I love a good MC listen but unfortunately this only had brief references of the Club and very short visits - the main characters live together in a house..... no badass bikers around. 24 yr old Heroine with an over protective brother returns home after eight years away, she has always lusted over Hero, mutual chemistry, forbidden sex for two weeks (which is hot) and an ex boyfriend stalker causes havoc and mayhem.

But I didn't feel the passion, the romance or the togetherness, no "I love you's" or tender words and a blah letdown of a rushed ending. I think also my problems was the narrator's voice for the Hero which sadly just didn't 'do it for me' but the rest of the characters were ok - told from dual POV's.

Worth a credit? It was a passable listen but regrettably also forgettable.... just because the author mentions bikes, old ladies, biker clothes and tattoos doesn't make it a MC book, so IMHO, not creditworthy but yes get it when it's on sale.

Not really an MC novel

I would involve the MC more ... this read more like any other romance with the allure of an MC in the back ground.

If you’ve listened to books by Celia Loren before, how does this one compare?

This is my first book.

No scene was stellar. If I had a favorite part it was the prologue.

No. This was an okay short read. Nothing special about it. Nothing stands out about it.

This is definitely not a book that you get all emotional about. The characters are okay ... the story is average... nothing stands out to make this stand out. If it goes on sale I would say buy if it hits $10 or less. Not worth a credit or buy unless very cheap.