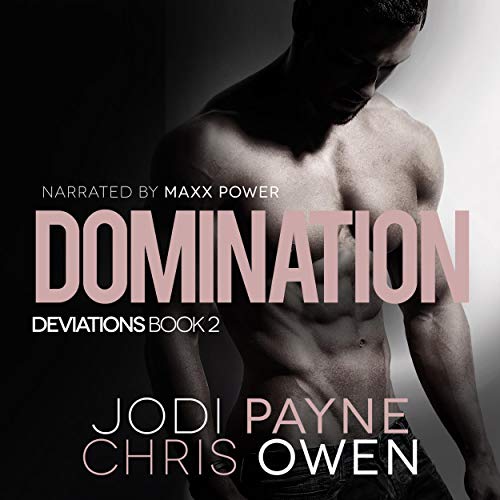 In this sequel to Deviations: Submission, Dom Tobias and Sub Noah are back, learning more about each other and their relationship, testing the boundaries of what they can and cannot handle, both together and apart. Tobias works at becoming more comfortable and finding his balance as a full-time Master again. Meanwhile, his work brings out the true submissive in Noah, who faces some of his greatest fears, and his greatest secrets, confessing to Noah about a terrible time in his past.

He's not the only one who has a rough time. Tobias breaks down and shows Noah he's not all dominance, too, which sends shockwaves through their romance, leaving them to wonder if they can keep it together.

What listeners say about Deviations: Domination

The Story Continues and the Love Deepens

Book 2 in the series picks up where Book 1 left off. Fortunately I had both audiobooks and so was able to listen to this book immediately after the first. The transition was smooth as Maxx Power narrated this book as well, so the voices and narration style were the same. That was great because I enjoyed the first book, and in turn, this one as well.

Tobias and Noah are adjusting to their new relationship. Tobias visits his friend Bradford, the owner of the BDSM Club. Bradford schools Tobias, reminding him of the role of a Dom, pointing out that if he’s not helping Noah, he’s running the risk of hurting him. He also points out that if Tobias lets Noah ‘coast’ through his submission, then neither man is getting his needs met. Finally, he tells Tobias to trust Noah. And this is the theme throughout the book. In the first book, it was revealed Tobias’ last slave, Phan, left him. Tobias fears Noah will do the same.

Isn’t that a normal human reaction? Worrying the person we love will leave us? Even those who have absolute trust in their partners have moments of doubt.

As Bradford is reminding Tobias of the responsibilities of being a Dom, he also admits he is having trouble with Phan. After the slave left Tobias, Bradford took the man under his wing and they scene every week. The sessions are intense, with Phan needing more and more pain. Even a hardcore Sadist Dom like Bradford has limits, so he plans an intervention of sorts. As the book progresses, the listener is given glimpses into the slave’s life, both before and now.

Phan intrigued me in Book 1 and has piqued my curiosity. He is a hardcore masochist submissive, so the contrast with Noah (also a submissive but not masochistic) is stark.

Tobias resets his relationship with Noah, going back to strict high protocols. He pushes Noah’s limits, within the confines of their contract, of course. Noah finally talks about the abusive relationship he was in prior to meeting Tobias. I am reminded of a profound moment in the first book when Noah admitted he saw ‘penetration as punishment’. It broke me then and hearing the details of the abuse turned my stomach. Finally, both the listener and Tobias understand why Noah finds trust – and submission – such a challenge.

With Tobias’ persistent and gentle guidance, Noah sinks into submission, letting go, knowing someone will be there to catch him. In turn, Tobias is more open about his pain. Because Doms are people too, even they need support.

As Noah sinks into submission, and by extension, subspace, he lets go. Now, it is unusual for someone to be in subspace for prolonged period of time like Noah, but the meditational quality of his time with Tobias does have clear benefits. I was a bit jealous of the relationship because they really are perfect together.

Add in one of the hottest scenes at the New Year’s Eve party and the emotion-filled scene at the end, and I was content that Tobias and Noah have their happily ever after.

But there are more books in the series and I’m hoping they will be released on audio soon.

Wow, I love Tobias and Noah. They are made for each other and so willing to help others. The challenges they both faced moving to the next level was natural progress to any relationship. I even loved the enter action between Noah and Phantom, which I believe is a step in the right direction. I must say takes courage for Tobias to give in to Noah, I love him for his vulnerability. Most of all, I love Noah for being the man/ submissive Tobias needs when he needs him to be. Now my curiosity is piked and needs to know the next steps in their developing relationship.

This book gives us the story of Tobias and Noah’s relationship. We watch it progress and grow into something strong and precious. They have their ups and downs as any couple does. As much as I enjoyed their story, I found the constant worry about Phan by Tobias to be a distraction to their relationship almost bordering on an obsession by the man. We know that the young man has gone through more than his share of abuse, but it seems that Noah is left out in the cold more often than not and is always having to just understand and ends up being compared to Phan. This in turn makes this relationship almost one-sided and not balanced. It seemed that there were three people in this relationship and Phan takes over a book that is supposed to be about Noah and Tobias many times. Noah and Tobias have some hot moments and the love Noah has for Tobias is clearly evident. It was nice to see the two work to find a happy ending. They each find that there are many dimensions to their relationship and must learn how to deal with them. Narrator Maxx Power does a good job with keeping the story moving along at a good pace. I liked the voice of Tobias, but I felt that many of the other voices were lacking and the submissive voices all sounded as if they were too young. I was given this free review copy audiobook at my request and have voluntarily left this review.

Enjoyed this as much as the first!

I really enjoyed hearing more about Tobias and Noah! Didn't expect to like these as much as I have. "I was given this free review copy audiobook at my request and have voluntarily left this review."

This is the continuation of Tobias and Noah's story as they settle into their relationship. This one focuses more on Tobias as he gets more into his role as the Dom and helps Noah reach his true submissiveness as their trust grows and flourishes. I really enjoyed watching these two men really settle in and bond. The narrator did a great portrayal of the characters and the story. I voluntarily reviewed a gifted copy of this audiobook.

Not too bad for a sequel.

I absolutely loved it! This book delves further into the romance surrounding Tobias and Noah relationship. The narration was superb. I can't wait to read the next book in this series (Discipline). I was given this free review copy audiobook at my request and have voluntarily left this review.

Kinky and complicated can be just what is the right thing to have. Great series. Great narration with a very enjoyable voice to listen too.

I wish I could be more positive

We learn that Tobias has been badly hurt by the end of his previous Dom/sub (Master/slave) relationship, but that history is in the first book. I wish I could be more positive about the book, but I just cannot seem to feel the emotion and eroticism.

I received this free copy from the author/narrator and voluntarily offered an unbiased review.

Now that I'm in sync with story the storyline is falling in place and you are able to see the trust and love grow between Tobias and Noah and at the same time you see how Tobias and Bradford helps Phantom to face and confront the horrors and abuse he went through as a child to the day his parents kicked him on the street and were Tobias and Bradford takes him in Tobias as his Dom and Bradford as a friend and later as Dom also. It is a very good story of the ups and downs in Tobias and Noah the battles to learn trust, limits and faith for each other. Noah learns the true meaning of being a sub and in doing so he learns things that go beyond his limits to prove himself and make Tobias even happier. Also Noah meets with Phantom and they become friends and Noah learns that Phantom is no threat and be a very good and deserving friend and Phantom can clue him into factor that Noah did not know about Tobias. The covers from Christmas to New Years and durning that time you watch Tobias and Noah in public and closed sessions, you get to enjoy a New Years party were Tobias let's Phantom and Noah play and both are rewarded in doing this all three become closer and ready for the next step in helping Phantom. And finally you get to go a party and attend the collaring of Noah and his claiming as Tobias sub and lover. The collaring is the most important item in bonding a sub to his master and let's everyone know that Noah is off limits unless Tobias says so. Recommend the series I am sure you will enjoy if you are into HEAVY BDSM