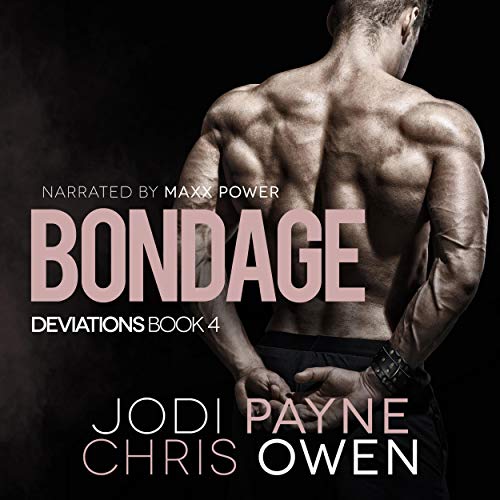 Noah and Tobias come back from Paris with a renewed contract and a deeper personal bond. Too bad things don't go as smoothly at home. When they get back, they face a crisis that might just threaten their contract, and their personal intimacy.

The crisis has a ripple effect, but Tobias and Noah finally learn that they can evolve with it, instead of collapsing. They experiment with scene after scene, making them longer, deeper, which allows them to explore more than they've ever dared. They even explore moving in together. When Noah is forced to face the danger of his job, he starts to question why he became a cop.

Tobias is also questioning his job. Soon enough, their external life is changing enough that they're forced to lean on each other to sustain them. Can they achieve a comfortable balance between their outside life, their scenes, and their love?

What listeners say about Deviations: Bondage

Tobias and Noah are back

For readers who love sex scenes, you’ll be thrilled. There are many different repetitions and many different variations. Unfortunately, for me, they became a little tedious. I wanted character growth and maturity and I didn’t feel the sex was moving me forward in my appreciation of the characters. Don’t get me wrong, I love these men. I love Tobias the Dominant who sometimes needs to be taken. I adore Noah the gentle submissive who is also a cop. And Phan? His pain in previous books was palpable and I really hoped he’d get a happy ending. Don’t get me wrong, this is a strong book – it just didn’t sit as well with me as the first three. There is a fifth book to come and I eagerly await its audio release (please please please). I’ll snap it up and hope it will be a fitting closure to this great series.

Maxx Power is a great narrator for this series. He has the perfect voice for each of the main characters and handles all the secondary characters as well. His performance is always top quality and this was another great example of his talent.

I am not typically interested in male/male stories but this one is absolutely an exception. I thought it was very well written. I have just started the next story and will be listening to the rest of the series by this author.

Wow, this book has caught me off guard. I had a feeling this is what Phantom wanted but, didn’t think it would happen. I must say that is the best for him. As for Tobias and Noah their relationship has definitely gone above and beyond. As for the major life changes that have taken place, I’m praying everything continues to evolve. I must say I am curious as to how everything will play out now that their are officially a triad. I must say I also, curious to see if Noah will be a top for Phantom. Above all Phantom scars me the most, being that he left the first time and now he seems to be grounded with Noah and Tobias.

Great narration by Maxx Power. He gave all three characters very distinctive voices that suited their positions in the relationship. The emotions were expressed very well, and the delivery speed was perfect.

I received a copy of this audiobook at my request and have voluntarily left this unbiased review.

It was nice to revisit Deviations #4 in audio, and narrator Maxx Power is perfect for this one. His steady, gruff and sexy voice is wonderful for Tobias, and his sweetly high pitched voice for Phan is adorable. Mr. Power really gets the chemistry between the three men; and for those of us who like two subs in action, I have to say his performance of the scenes between Noah and Phantom are toe curlingly marvelous.

It makes me so happy to see these three men, whom I’ve come to love, reach a place in their lives where I know they’re settled. And listening to Maxx Power bring them to life is a pleasure!

an audiobook copy of Bondage, Deviations #4 was provided to me for the purpose of my review

I liked it! This book is very graphic and detailed regarding the BDSM. The sex was off the chart hot. The narration was good and kept me entertained. The author did a good job with the characters but at times the plot seemed to be lacking a bit. I probably would have gotten more out of this book if I had read the previous one in this series. This was my first book by these authors and I would read more of their books. I was given this free review copy audiobook at my request and have voluntarily left this review.

Not really my style

I received a free copy of this in exchange for an unbiased review. I definitely didn't hate it, but some of the characters just didn't seem real. And others were completely unlikable. I wouldn't read a sequel.

Tobias what trouble you are in

Of all the books I actually like this one the best due it had heart and comedy and could not but laugh at Tobias, Noah and now Phan get into you even see a bit of humor from Bradford. Tobias and Noah take Phan in so he does not return to his parents but in doing so they open a can of worms were Tobias finds himself trying to learn and cope with two subs and one Phan being a wild wind and crazy of a persn Noah starts picking up trick from him and Tobias finds himself in a position not knowing what to expect when comes home. The three of them in this audiobook are like a hurricane the two nice, quite and willing subs but in here you find two very mischievous subs keeping Tobias off balance and in trouble. There are some serious storylines they buy a new home and Phan and Noah set the place up, Noah is in a gun fight get knocked out but his partner is shot and see Noah usually very strong come apart and you see both Tobias and Phan come to his aid not as master and subs but as a loving and carrying family.
In this audiobook as well as the Audiobooks there are many storylines and the authors weaves these storylines into a great audiobook and you are either laughing or almost in tears wondering going to happen next and hoping Phan and Noah does kill poor Tobias.