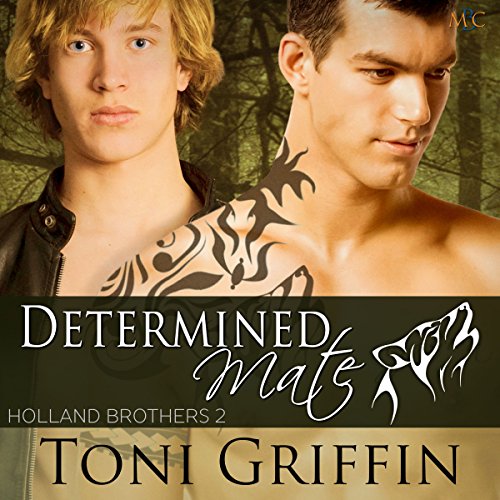 Jason Matthew's is a broken man. He's lived through hell and barely come out the other side. All he can thing about is getting to his best friend, Brian, but after that he has no idea. Jason's scared out of his mind when he's met by not only Brian but two large men as well, and he does the only thing he can think to do. He tries to run. One of the men, though, turns out to be his mate. A mate he is in no condition to have or want, a mate that won't allow him to flee.

Alex Holland is forced to stand by and watch as Jason is taken to the safest place they know, too scared to be around him. He knows something bad has happened to Jason and he's going to need every ounce of his Alpha control to give his mate the time he needs to heal and start living again.

What listeners say about Determined Mate

Hurt/Comfort with some suspense

I enjoyed reading the first of the series, Unexpected Mate, enough to pick up Alex’s story.

Alex Holland is the Alpha of the Leyburn shifter pack so when his brother’s mate Brian’s best friend, Jason Matthews, calls and asks to come to Brian’s home he’s granted sanctuary. From the moment Alex hears Jason’s voice he’s almost sure Jason is his mate. When Jason shows up at the house, his senses are confirmed. Alex is overjoyed at the sexy, beautiful man, but quickly notices something wrong: mainly Jason freaking out entirely upon seeing Alex and his brother.

Jason’s been kicked out of his pack, and come to his best friend Brian for comfort while he heals. However, instead of being happy to have found his fated mate, Jason is horrified. Having just been through a traumatic experience only a couple of weeks before, he is now shattered and cannot stand to be around big men. Which is unfortunate being that all the Holland men are super-huge.

But Alex is patient and works with Brian to make Jason as comfortable as possible, giving Jason the time to heal so Alex may finally claim his mate.

Though I really enjoyed the hurt/comfort aspect of the story, unfortunately that enjoyment was dampened by the author using the plot device of teasing the “traumatic event” that has hurt one of the main characters so deeply, but not letting the reader know what the event was for more than half the story.

Now, I will admit this is a personal pet peeve of mine and not shared by everyone. I just hate it when that’s done, I mean it drives me absolutely nuts!

I enjoyed Dominic McCartney’s narration of the story, his tone and character voices were good and overall he made listening to the story fun.

In the end I enjoyed the story enough to want to pick up the next book in the series, Protective Mate and see how it goes.

The Holland Brothers books so far each have a strong premise and appealing characters that make you want to read the next character's book to find what happens. Unfortunately the actual stories are only So, So. The narration is appropriately Australian but doesn't bring up the overall effect. Determined Mate is a fairly unrealistic portrayal of recovery for someone who has gone through the trauma portrayed. But again the characters are likeable so I'm just as glad he reaches his HEA as easily as he does. Good book to get on sale.

This has been the best audiobook I have ever listened to except fot the others in this series.

i love it all

This is the 2nd book in the Australian based shifter series. This is the story of Jason and Alex, the alpha of the pack that we met in Book 1. Jason is also Brian's (Book 1) best friend. He goes through a horrific trauma and seeks out Brian for comfort. He meets Alex Holland and realized he is his mate. But Jason is not ready to accept a mate and thus the story begins. I didn't enjoy it as much as the first book, but it was still good. I love seeing Brian again and the brother's mom and dad are just priceless. Although this is a stand alone, I think you really have to read Book 1 to get the full enjoyment, as the relationship between the brothers is part of the enjoyment. The narrator does a great job and really brings these men to life with his great Aussie accent.

Jason is Brian’s friend and he had been left behind at the pack when Brian was exiled for being gay. Unfortunately he was found out as well and beat up and forced to find refuge with Brian and his mate.

Luckily, one of the Holland brother’s – Alex – turns out to be Jason’s mate. The problem is that now Jason is terrified of the Alpha in Alex and doesn’t know if he’ll ever be able to mate with im.

With the help of Brian and the Holland family Jason finds the ability to heal and accept Alex as a mate.

This was a good second installment in the series. I didn’t like it as much as book one, but it was still very sweet. I didn’t connect with the MCs as much as I did in book one, and I think the abuse made their connection more awkward.

Jason and Alex are sweet together when they finally move past the abuse. You have to put on your “suspension of disbelief” glasses and trust in the power of the mate bond, but that’s fairly typical for shifter stories.

Dominic McCartney does a great job with this and book one. His accent makes the story feel more authentic and he has a good sense of timing.

I listened to the audio version of this book. Narration - it was pretty good, none of the voices were silly but sometimes the accent felt British, sometimes Australian.

This is the story of Jason and Alex. Jason, a shifter, has been hurt, physically and emotionally. He runs to his best friend, Brian, for safe harbor and finds himself face to face with an Alpha wolf. He's Brian's new pack leader. And Jason's mate.

Alex was a great protector, gentle and patient. Jason was likable and he works hard to reclaim his life. I know this is fiction but a bit of realism was lacking in the way Jason recovers super fast from his trauma. And, I don't think the story needed the bad guy coming after Jason. Jason's recovery could have played out slowly in the book, rather than being sacrificed (resolved quickly) to make room for another plot point.

Regarding the spicy parts, the sex was pretty straightforward. If you are looking for creativity in the bedroom, it's not in this book.

The book is heartbreaking and all kinds of vulnerable. If you like stories about overcoming tragedy and healing love, you will like this book.

This was a much more angsty and sad book than the first book. There is a lot more going on outside of the relationship. The fact that Jason has been kicked out because he's gay and had an incident happen that messed him up in the first place that caused everyone to find out is the beginning of it. Then we have the person behind the crime... Then there is the over protective alpha.

It was just a great story to watch unfold and watch the characters bloom and develop as they find their way with each other.

I have to say that I enjoyed for once seeing mates that were fated to be together and knew that they wanted to be together, but were also willing to do the work they needed to in order for it to be a healthy relationship.

The narrator did a good job with this book as well as the first one.

I received a free copy of this book to read for Inked Rainbow Reads in exchange for an honest review.

I love this book.

Love the storyline, execellent narrator. Can't wait until the next installment of delightful stories.