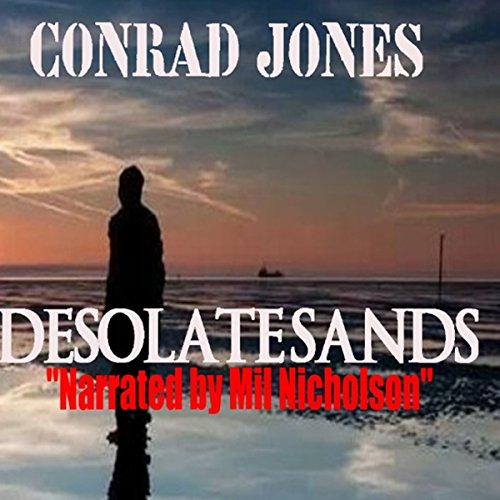 When well-known community activist, Lacey Taylor goes missing whilst walking her dog, the police are at a loss to find any evidence as to where she is. A local man finds the collar, which belonged to her dog near Crosby Beach, home of the eerie Iron Men statues (Anthony Gormley's 'Another Place') and DI Annie Jones calls in the canine units to aid the search. What they find shocks even the most hardened detectives on her Major Investigation Team.

What listeners say about Desolate Sands

What a fantastic story writer Conrad Jones is, this book has lots of twists and turns and moves along at a good pace. There is some gruesome violence - so if you like your books dark, you'll love this!

He has done it again

Conrad Jones does it again but be prepared this is a particularly gruesome one (which I love not sure what that says about me). It’s an exciting audio with great narration and full of twists and turns at all times. This does not disappoint.

This is a first for me for this author and won’t be my last, a great storyline that was well written and flowed well. This book had it all, it was gorey in explanations but I enjoy this kind of read, but also had me chuckling at times. The backstory of characters was enough to follow the story and though part of a series could be read/listened to as a stand alone. The narrator was ok but being female carrying off male characters was a little difficult as majority of the characters are male. But overall it didn’t effect the quality of the book.

I say emotional because I feel as though I have been turned in a washing machine emotionally. Disgust, horror, sadness tinted with a little happiness. I loved it. It held me throughout. Reading some chapters before sleep is not recommended. It did not deter me. I shall never look at pictures of the statues on Crosby in the same way again. Brilliant,

A fantastic roller coaster of a book with many twists and turns and has you hooked quickly and eager to know more and more. Some really great characters and I thoroughly enjoyed this listen.

Oh my! Conrad Jones has excelled himself this time! I've read several of his books and loved them all, but this is definitely one of the best. What a twisted mind Mr Jones has. The way the poor victims died gave me the creeps! The storyline is so cleverly constructed, and the characterisation is brilliant. I loved the setting of Crosby beach and the Iron Men. I haven't visited this area (even though I lived in Liverpool for a few months several years ago) but now I really want to visit. If you like well crafted thrillers with plenty of gore then this is a must read! I listened to the book on Audible, and was slightly disappointed by the narrator who mis-pronounced some words, but that didn't spoil an excellent book.

Desolate Sands is a gripping story with several twists and a few surprises right to the end all in all a very good read.

Excellent novel shame about the narrator

Would you consider the audio edition of Desolate Sands to be better than the print version?

Annie Jones, she's a great character who bounces back from adversity

The only thing I liked about the performance (in terms of narration) was that it was NOT narrated by Paul Holbrook, I disliked the fact that it was narrated by Mil Nicholson who, did at least attempt a British accent (unlike Paul Holbrook in earlier novels) , but still sounded stiff and stilted, the pronunciation of many words and phrases was distinctly off-putting she sounds like an old lady out of puff after running for a bus who then has to re-adjust her dentures when she stops for breath

There were several moments that made me stop and think but nothing that particularly moved me, although I was extremely impressed with the way the story continued well after the point that I felt certain would be the End. I was delighted to discover that there were another 2 hours to go after what I had imagined would be the finale. Mil's narration was pretty bad but not bad enough to distract from what is, at the end of the day, a rather brilliant storyline.

This is an excellent addition to the Alec Ramsey series, if you enjoyed The Child Taker and Criminally Insane you will love this (although, to be clear, it does NOT feature Tank)

Plenty of twists and turns

An intricate plot, never sure who did what until the end. A lot of unexpected happenings too. A bit too graphic in parts so I had to move forward.

Have you listened to any of Mil Nicholson’s other performances? How does this one compare?

No I haven't. I did find some characters voices confusing as to who was speaking. Still not sure if Mil is male or female.

Yes but I can't give it away

A good listen, but be aware of the language and gory descriptions.