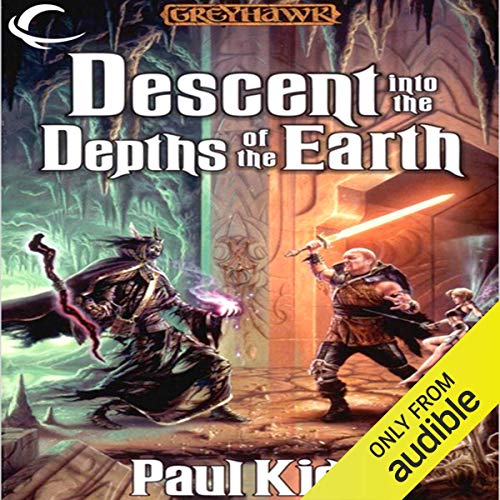 Descent Into the Depths of the Earth

The ranger and the faerie are back! Fresh from their encounter at White Plume Mountain, the Justicar and Escalla are on the way to Hommlet. But life around a pixie is never exactly...stable. Escalla is drawn into the intrigues of the faerie court. Before he knows it, to save her life the Justicar is on his way into the depts of the earth to fight hobgoblins, drow, and the queen of the demonweb pits. For an adventurer, it's all in a day's work.

What listeners say about Descent Into the Depths of the Earth

Where does Descent Into the Depths of the Earth rank among all the audiobooks you’ve listened to so far?

Liked the book immensely. This ranks in my top 25th percentile. Too many things crammed together to tightly at the end made it difficult for a "light read". It was as though the author or editing staff rushed to get an ending. Still, the setup was strong and engaging, hooking the listener with strong character development and interaction. The stories mystery was wonderfully crafted and presented.

What was one of the most memorable moments of Descent Into the Depths of the Earth?

Nothing stands out strongly to me.

What about Bernard Setaro Clark’s performance did you like?

Mr. Clark has a wonderful storytellers voice. One could easily imagine him in an old time pub telling tales that captivated listeners. Characterizations were eloquent and superb.

At the end I was impressed with the fairy lords love for his daughter.

A great listen to say say the least.

I really enjoyed book 1 but this one felt "phoned in" the performance was fine but once the sentient things start arguing with each other the voices became very over the top and I started to cringe when certain things would talk. The story was shoe horned into an old D&D module I enjoyed as a kid, but it really feels forced. I haven't decided if I'll give book 3 a chance yet as this was just too silly at times.

I believe this trilogy is a secret gem. Such a wonderful ride. A great series of books to not only introduce people to the world of Dungens and Dragons but gives you some amazing characters to fall in love with

I quite enjoyed this second installment of D&D, action packed, well paced, smart protagonist and hell on wheels. During my read I found myself thinking that if Riddick had a crew and magic it would be like this. Can't wait to start the third one.

Feel and fun of a D&D Adventure

after a lifetime of reading fantasy stories, I hsve to say that this talw is the first I've read that really captures the feel of a Dungeons and Dragons game. Building on from White Plume, the characters, act, fight amd talk in a manmer that holds disbelief, but captures the teasing, banter and pop reference comments of an actual gaming session. it does this without breaking the fourth wall, however, allowing to get the feeling you are following actual fantasy characters, while depicting some of the most fun elements of game play.

loved it. I remember playing through all of these adventures when I was a kid. it was fun to relive it in a story. well written and funny.

Have you ever played a Dungeons and Dragons game & thought that it would be a good book if you wrote down every detail? This book is like a wonderful D&D game come to life and made into a story. It's a MUST READ. This is the second novel in a six book series but at this point I could read 20 such tales with the same characters & never tire. Well done & thank you to both the author, Paul Kidd & the narrator, Bernard Setaro Clark. I will never forget these books. Good times.

I really enjoyed the book, and I enjoyed Bernard Setaro Clark’s reading even more. This is not great literature, but I do like to enjoy some nostalgic mind candy nonetheless. I look forward to the next adventure.

Was entertained from start to finish. The narrator did a wonderful job as always. Looking forward to listening to the book of this series. I highly recommend it.

I really liked and enjoyed this entire series, wish he had written more... Characters develop as the series progresses...

ok, it took a while to get used to the narrator doing a female Irish lilt when he voiced the fairy, but once I'd gotten over that I thoroughly enjoyed this story and the multitude of voices the narrator bought to the story. this book will benefit from you having read the previous installment White Plume Mountain based on the Dungeons and Dragons module of the same name. if you like stories about Rangers, hellhounds, and intelligent weapons this book is for you!