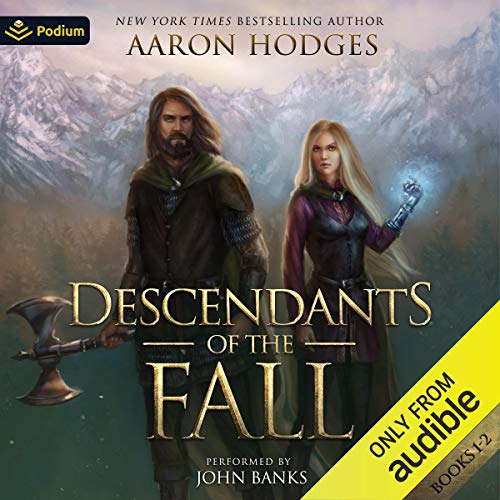 Descendants of the Fall: Publisher's Pack

Contains books one and two of Descendants of the Fall.

Centuries ago, the world fell. From the ashes rose a terrible new species - the Tangata. Now they wage war against the kingdoms of man. And humanity is losing.

Recruited straight from his academy, 20-year-old Lukys hopes the frontier will make a soldier out of him. But Tangata are massing in the South, and the allied armies are desperate. They will do anything to halt the enemy advance - including sending untrained men and women into battle. Determined to survive, Lukys seeks aid from the only man who seems to care: Romaine, the last warrior of an extinct kingdom.

Meanwhile, the queen’s archivist leads an expedition deep beneath the earth. She seeks to uncover the secrets of the Gods. Their magic has been lost to the ages, yet artifacts remain, objects of power that could turn the tide of the war. But salvation is not all that waits beneath the surface. Something else slumbers in the darkness. Something old. Something evil.

Wrath of the Forgotten, book two

A war is brewing between the kingdoms of humanity. Bound and broken, Lukys stumbles through the darkness. Whispers come from all around, the voices of the Tangata, inhuman enemies of mankind. He should already be dead. But the Tangata have a secret, one that might finally end 10 long years of war. If only he could escape and bring word to his people. But what chance does a failed soldier have against the terrifying powers of the Tangata?

Meanwhile, the queen’s archivist flees the wrath of her former master. A foreign king offers asylum, but the man is an enemy of her people. And his aid will cost far more than just her loyalty - he seeks the magic of the Gods. With the hounds drawing close, Erika must commit the ultimate betrayal to keep her freedom. Is she willing to pay the price?

What listeners say about Descendants of the Fall: Publisher's Pack

loved everything about it! definitely will be downloading. ore of Aaron's books, I have found a new favorite Author....

Terrific narration of an exciting story. There are enough twists and turns to satisfy anyone’s taste for surprise. Now I have to get the next book in the series.

the bundle pack is book 1 and book 2, if you are looking for some fantasy that has a easy flow that will keep your attention then this set is worth checking out.

Absolutely enjoyed this book thank you to the author and narrator, I would definitely recommend to anyone